Training  >>  How It Works  >>  How Do Semisubmersibles Work?
HOW IT WORKS

How Do Semisubmersibles Work?

Originally conceived as a bottom-supported drilling unit, semisubmersibles eventually found their true calling. Now, semisubs are the most stable of any floating rig, many times chosen for harsh conditions because of their ability to withstand rough waters. 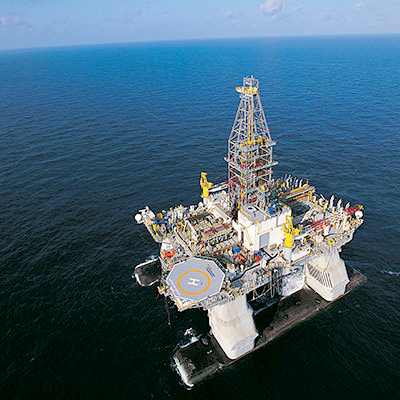 A semisubmersible is a MODU designed with a platform-type deck that contains drilling equipment and other machinery supported by pontoon-type columns that are submerged into the water. Another type of drilling rig that can drill in ultra-deepwaters, drillships are capable of holding more equipment; but semisubmersibles are chosen for their stability. The design concept of partially submerging the rig lessens both rolling and pitching on semisubs.

While in transit, semisubs are not lowered into the water. Only during drilling operations are semisubs partially submerged. Because semisubs can float on the top of the water, transporting these rigs from location to location is made easier. Some semis are transported via outside vessels, such as tugs or barges, and some have their own propulsion method for transport.

Based on the way the rig is submerged in the water, there are two main types of semisubmersibles: bottle-type semisubs and column-stabilized semisubs. 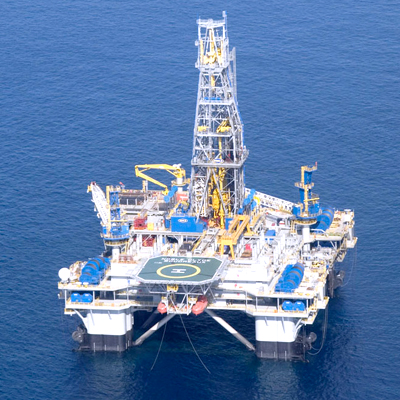 Bottle-type semisubs consist of bottle-shaped hulls below the drilling deck that can be submerged by filling the hulls with water. The first incarnation of this type of drilling rig, bottle-type semisubs originally were conceived as submersible rigs. As a submersible, the bottles below the rig were completely submerged, resting on the ocean floor.

But, as time progressed, naval architects realized that the rig would maintain its stabilization if the bottles were only partially submerged, but be able to drill in deeper waters. Mooring lines are then used to keep the semisub in place, and these anchors are the only connection the rig has with the sea floor. Eventually, these bottle-type rigs were designed to only serve as semisubs.

As a semisub, the rig offered exceptional stability for drilling operations, and rolling and pitching from waves and wind was great diminished. In addition to occasional weather threats, such as storms, cyclones or hurricanes, some drilling locations are always harsh with constant rough waters. Being able to drill in deeper and rougher waters, semisubs opened up a new avenue for exploration and development operations. 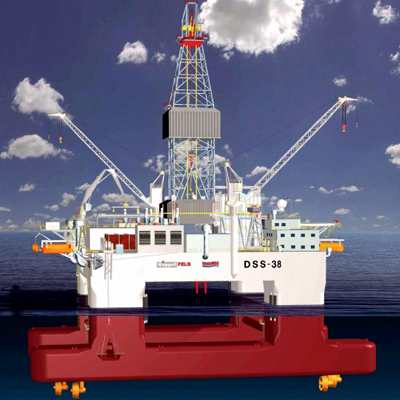 A more popular design for semisubmersible rigs is the column-stabilized semisub. Here, two horizontal hulls are connected via cylindrical or rectangular columns to the drilling deck above the water. Smaller diagonal columns are used to support the structure.

Submerging this type of semisub is achieved by partially filling the horizontal hulls with water until the rig has submerged to the desired depth. Mooring lines anchor the rig above the well, and dynamic positioning can help to keep the semisub on location, as well.

Semisubmersibles and other mobile offshore facilities are moored in systematic ways, but there are many different designs for various situations. Mooring is similar to multiple anchors, and a number of spread mooring patterns are used to keep the floating rig in place, including symmetric six-line, symmetric eight-line, symmetric twelve-line and 45i-90i nine-line, among others. These mooring spreads are chosen depending on the shape of the vessel being moored and the sea conditions in which it will be moored. 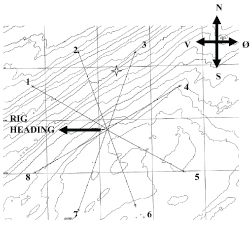 Because the wellbore is extremely precise, it is very important that the semisub is kept in position, despite the waves and the winds working to move it about. Furthermore, working in ultra-deepwaters, the drilling riser pipe may span thousands of feet from the bottom of the semisub to the stationary subsea well equipment located on the ocean floor.

The drilling equipment is somewhat flexible to overcome slight movements caused by the wind and waves, but the drilling risers must not be bent beyond what it can manage, or they will break.

Additionally, dynamic positioning can be used as well as mooring lines to keep the rig in place. Dynamic positioning uses different motors or propulsion units on the vessel to counteract against the motions of the water. Many times, the dynamic positioning system is guided by telemetry signals from beacons on the ocean floor, satellite information and the angular movements of a cable.