How Does a Drillship Work?

Truly what it sounds like, a drillship is a marine vessel that's been modified to drill oil and gas wells. While drillships look similar to a tanker or cargo vessel, there are a couple of major differences. Drillships are equipped with a drilling derrick and moon pool. Additionally, drillships have extensive mooring or positioning equipment, as well as a helipad to receive supplies and transport staff. 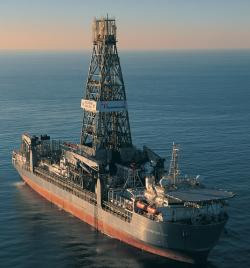 Typically employed in deep and ultra-deep waters, drillships work in water depths ranging from 2,000 to more than 10,000 feet (610 to 3,048 meters). Drilling equipment is passed through the vessel's moon pool and connected to the well equipment below via riser pipe, a somewhat flexible pipe that extends from the top of the subsea well to the bottom of the drillship.

Drillships are differentiated from other offshore drilling units by their easy mobility. While semisubmersible rigs can also drill in deep waters, drillships are able to propel themselves from well to well and location to location, unlike semisubs, which must rely on an outside transport vessel to transfer them from place to place. 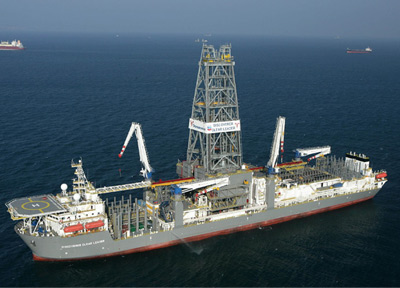 While capable of drilling in deep and ultra-deep waters, a disadvantage to using a drillship is its susceptibility to being agitated by waves, wind and currents. This is especially troublesome when the vessel is actually drilling, because the drillship is connected to equipment thousands of feet under the sea.

A proper mooring system on a drillship is integral to drilling successful wells. In shallower waters, drillships are moored to the seafloor with anywhere from 6 to twelve anchors. Once the water depth becomes too deep, drillships depend on dynamic positioning systems (DPS) to keep the vessel in place while drilling. DPS relies on several thrusters located on the fore, aft and mid sections of the ship, which are activated by an onboard computer that constantly monitors winds and waves to adjust the thrusters to compensate for these changes. Sometimes, both positioning systems are used.

Drillships were first developed in the late 1940s by marine architects. Created to overcome water depth challenges offshore California in the Pacific Ocean, the first drillship was a surplus U.S. Navy patrol craft that was equipped with cantilevered drilling equipment. Seeing some success, the next drill ship incorporated a moon pool and an onboard drilling derrick. After its success, companies soon ordered the construction of subsequent drillships.

Transocean, Pride, Seadrill, Frontier Drilling and Noble are a few of the companies that own and operate drillships globally.