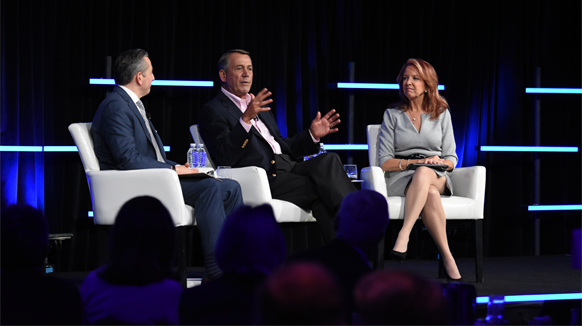 John Boehner delivers a fierce keynote in which he shares his view on Trump's presidency, whether or not he'd consider running for president and of course, Russia. Image courtesy of KPMG.

Regina Mayor, KPMG’s global sector head and U.S. national sector leader of energy and natural resources, promised no question would be off the table as she introduced former House speaker John Boehner as the luncheon keynote speaker for the KPMG Global Energy Conference May 24.

For an hour straight, Boehner candidly – and at times, humorously – answered questions about a little bit of everything, from what he thinks of Donald Trump’s first 100 days as president to possibilities of impeachment.

Boehner resigned from the Congress in October 2015 and is still quite content with his decision today.

Still, he has a lot to say about the goings on in the White House. For one, the election of President Trump himself.

Boehner said he’s been friends with Trump for 15 years, golfed with him and even said if he was having a bad day, Trump would be the first person to call and check on him or offer a pat on the back.

“But president? I just never envisioned him in that role,” he said and also suggested that Trump not be allowed to tweet overnight.

Still, when asked what he thinks Trump’s done well in his first 100 days in office, Boehner said he’s done well with international affairs and foreign policy. In regard to national security, international leaders are thrilled to death that Trump is aggressive about fighting ISIS and getting more boots on the ground to do so, he said.

Boehner said Trump “did what he could” with healthcare, but never subscribed to the idea of ‘repeal, then replace.’ Instead he should have worked to ‘repair’ Obamacare.

“Everything else he’s done [in office] has been a complete disaster,” said Boehner. “He’s still learning how to be president.”

Here are more of Boehner’s candid responses on the following:

B  |  May 28, 2017
Boehner should have learned to Speaker of the House rather than be I am,a yes child
smartalek  |  May 28, 2017
iAnd I’m not willing to give all that up to be president/i.” And those grapes were probably really sour anyway. Yeah, Im sure they were. So, no loss at all.
naro wampanoag  |  May 27, 2017
This incompetent leader oversaw the tremendous expansion of the Federal Debt under Obama and helped create a massive credit card economy. Boenner himself has been a massive disaster for the country which is why his fellow Republicans kicked him in the arrrse.
Mark  |  May 27, 2017
Speakers Boehner is a great Ohioan and a carrying man. Thank you for all of your service.
Frank  |  May 27, 2017
We’re the envy of the entire world Most certainly not! We are happy to live in The Netherlands/Europe and see the USA as a dilapidated country where decay was constant in 30 years and which is now really destroying itself.
Rick Held  |  May 27, 2017
Who cares what this loser has to say? Talk about disasters: He is right up there with Hillary and Bernie. Pot meet kettle in my opinion. Oil conference must have money and time to waste hiring this speaker.
Steve  |  May 26, 2017
Trump never learned to be human. Learning to be President would only present us with a textbook case of Dunning-Kruger syndrome aggravated by malignant narcissism crossed with a deep need to make Russia happy.
tom  |  May 26, 2017
first, He needs to learn how to be a human being let alone presidency.
eric  |  May 26, 2017
And how exactly is Boehner and Trump bashing related to an oil & gas website? PLEASE!!!
john  |  May 26, 2017
Its funny! John Boehner is the man who cries every time he faces the fake newsmen, accomplishes very little during his tenure, and now has the audacity to judge a president that swept more than a dozen professional politicians to be elected accomplishing so much in just 3 months more than several presidents before him.
Jaffo Nerr  |  May 26, 2017
They both went to the same dermatologist to make their skin nice and orangey but the dye make Trump brain go soft and dribble out his ears. Boehner should not make fun of people with mental troubles like Trump.