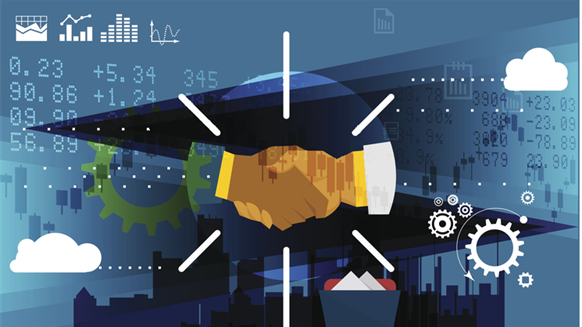 The GE-Baker Hughes deal could indicate a bounce ahead for troubled oilfield services sector.

Positioning itself to become the second largest oilfield services provider is one thing, but whether the mega-merger of GE Oil & Gas and Baker Hughes signals an abrupt end to the industry’s bloodletting is quite another.

GE Oil & Gas (NYSE: GE) is spinning out the oil and gas part of its business into a merger with Baker Hughes Inc. (NYSE: BHI) that will be structured as a new partnership in which GE will own 62.5 percent and BHI will hold 37.5 percent of the entity. Current BHI shareholders will receive a $17.50 per share cash dividend paid by $7.4 billion from GE, which will total $24 billion. The deal is expected wrap mid-2017.

The “deal makes the new BHI the second largest global OFS company [by revenue] behind SLB and provides BHI an enhanced platform through which to sell its top tier wellbore-centric oilfield products, technology and services,” TPH wrote in a note to investors, adding the deal balances the offerings of both companies throughout the hydrocarbon value chain of upstream, midstream and downstream.

What’s more, the deal suggests a turnaround of sorts for the oilfield services sector.

“We've seen a major race to the bottom with respect to OFS [oilfield services] pricing,” Wood Mackenzie’s Jonathan Garrett said in an Oct. 31 note. “More deals like this and partnerships should support better pricing support for OFS players going forward as activity picks up in the oil and gas space.”

In fact, the partnership could position GE to deploy substantial capital for acquisitions during the next few years, Fitch Ratings said in an Oct. 31 investors note.

Although BHI is more cyclical than GE, both sides of the combined businesses will benefit from increased diversification and a larger base of clients, Fitch said. And, it expects global exploration and production spending and activity to increase moderately in 2017 with a more robust growth profile in 2018.

“These considerations should support ‘new Baker Hughes’ operations and financial results, particularly given BHI’s strong drilling and completions businesses with a focus on the North American market,” Fitch said. “Annual synergies by 2020 are projected by GE to reach $1.2 billion, primarily from costs.”

The powerhouse that results from the $30 billion merger will yield more than $25 billion in revenue and position the new group to better compete with oilfield services leader Schlumberger (NYSE: SLB), said Cavendish Corporate Finance analysts.

“The oil and gas industry is showing signs of recovery, with barrel prices rebounding to $50 a barrel, but this deal still demonstrates a strong imperative for consolidation amongst businesses in the oil and gas industries, with GE cutting more than $1 billion in costs out of the company in a drive for a leaner and more resilient company,” said Philip Barker, partner and head of industrials at Cavendish Corporate Finance, in a statement.

"GE and Baker Hughes are bringing together mostly distinct yet complementary assets that will result in an industry leading integrated oil field equipment and services company," said Russell Solomon, senior vice president and Moody's lead analyst for General Electric Company, in an Oct. 31 report. “The new publicly traded integrated oil and gas company will be considerably stronger and better positioned for the coming recovery in oil and gas end markets than either company otherwise would be on a stand-alone basis.”

Analysts and deal lawyers have been expecting consolidation in oilfield services. Robert Gray, a corporate transactions law partner at Mayer Brown LLP in Houston told Rigzone a year ago that oilfield service companies have had to make the deepest cuts and didn’t have the ability to hedge their positions – a move that had offered some cushion to exploration and production companies.

In a note to investors, Jefferies analysts indicated it’s unlikely the GE-BHI deal would run into the same anti-trust issues that brought the BHI deal with Halliburton to a grinding halt.

“The largest overlapping business area in the GE-BHI portfolio is artificial lift (AL). Yet, BHI’s AL is highly weighted to electrical submersible pumps (ESP) and GE’s is almost exclusively reciprocating rod pumps, we believe,” Jefferies analysts wrote. “These different AL technologies handle different well types and we imagine that as such, the markets can be distinguished for anti-trust regulators.”

But WoodMack’s Garrett said that while some expect the new company to be a threat to Halliburton and Schlumberger, it will target a different segment of the oilfield services space.

“While Halliburton and Schlumberger have really spent a lot of energy and capital beefing up their frac options, this new company appears to really focus on the opex [operational expenditure] portion of operator spend,” he said. “The ‘opex to CAPEX [capital expenditure] switch across the industry was right on the money. The types of products the new company specializes in targets a segment that up until recently didn't get much attention (artificial lift, wellheads, pumps, compressors, etcetera).”

Herman Goodfellow  |  November 05, 2016
GE started out bringing good things to life but for the last twenty years or so, theyve focused on things like unscrupulous banking. Continuing that trend, they want to frack everyone and destroy our environment and climate. Up to $44 trillion could be going up in smoke if the world does not act on climate change, according to the latest piece of research from U.S. banking giant Citigroup.
RELATED COMPANIES
Company: Baker Hughes more info
Company: GE Oil & Gas more info