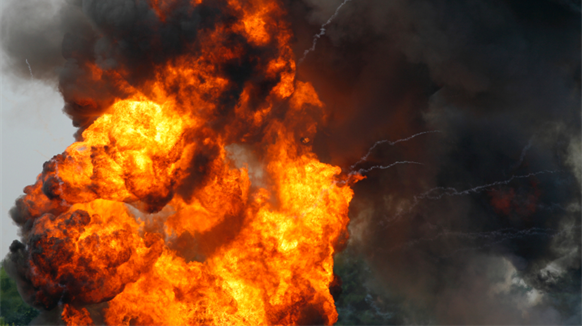 Chevron's RMP 23 and RMP 24 wells in Nigeria have been blown up, according to a Twitter statement from the Niger Delta Avengers.

Chevron’s RMP 23 and RMP 24 wells in Nigeria have been blown up, according to a Twitter statement from the Niger Delta Avengers.

With the heavy presence of 100 Gunboats, 4 Warships and Jet Bombers NDA blew up Chevron Oil Well RMP 23 and RMP 24 3:44am this Morning.

The attack was carried out in the presence of “100 gunboats, 4 warships and jet bombers,” said an NDA spokesperson in a Tweet. RMP 24 and RMP 23 were labeled by the group as some of Chevron’s highest producing wells.

Chevron was not immediately available to confirm the attack.

The Niger Delta Avengers claimed responsibility for an assault on Chevron’s Escravos terminal in Nigeria May 26.

NDA used explosives to damage the Escravos tank farm main electricity feed pipeline, which resulted in Chevron’s onshore activities in the Niger Delta being shut down.

The attack followed NDA’s warning to Chevron that no repair works should be carried out to facilities previously targeted by the group, until NDA’s demands are fully met. NDA claimed on its official website May 11 that it suspected Chevron was preparing to carry out repair works at the Okan Valve platform, which was blown up by the group at the start of the month.

In an emailed response to Rigzone last week, a Chevron spokesperson said that the company will not comment on the safety and security of its personnel and operations as a matter of long-standing policy.

The Escravos incident comes after a series of other attacks on oil and gas companies operating in the Niger Delta. These include:

“Despite the heavy presence of military in the creeks, it will not stop us from carrying out our operations. We are ready to destroy more pipelines,” said NDA spokesperson Col. Mudoch Agbinibowe on the group’s website.

“We won't only destroy pipelines, but will bring the fight to your tank farm and your Headquarters in Lekki, Lagos. If you continue to undermine us and go ahead with the repair works you won’t see us coming but we are coming for you,” the threat continued.

Don  |  June 02, 2016
The ND Avengers are only trying to draw govt attention to the plight of the people in the region. i am in the region and i have been opportuned to work in some of these communities, pls its nothing to writre home about. the US and other oil producing countries allow individuals who own the lands where these oils are produced get payment for them, inasmuch as the previous administration did not do well in terms of massive infrastructural development in the region during their time, monies were made available for developmental projects , roads, bridges, schools ,health centres , recreational centers, name it everything that make Abuja, Lagos (And probably PH which is actually nothing compared to the two aforementioned) look attractive for people to do business should be done to these Niger delta regions and lets see if peace will not reign and the govt and oil companies will operate with ease at the end its a win win situation for everybody. But with all the Armada of security vessels and trying to hush the need for meaningful development in the devasted region, I dont think any meaningful progress will be made, yes the pipes are blown , the enviroment is poluted, IOCs will leave ,Govt revenue will dwindle, the people will suffer. The solution is to draw a framework that will provide supervised massive developmental projects that will turn that region into an inudstrial, tourism and socially and economically viable region not just an artery of petrodollar to Govts and IOCs and a few other individuals .
Kit  |  June 01, 2016
I would surmise that the NDA are no different from Starlin, Castro, Pol Pot, Hitler, Mao, Chavez-Maduro etc., etc., etc.... megalomaniacs, dictators, tyrants communist, fascists, statist, revolutionaries,.... all they ever really deliver in the end is depressed economies that are paralyzed by graft corruption favoritism leaving destruction, hunger, poverty, an crippled countries in their wake...... But even more sadly, is that it is the graft corruption and inefficiency of the current institutions that provide such fertile ground for these fraudulent destructive institutions to flourish in...
K Rich  |  June 01, 2016
The entirely admirable aims of freeing the people of the Niger delta from environmental pollution, slavery and oppression did not seem to be top of their agenda when the Nigerian Government was paying them not to blow things up.
John post  |  June 01, 2016
Not intelligent coming from a depressed country. These are reasons why they are depressed.
Joshua  |  June 01, 2016
Is it terrorism when it's against your own government? It sounds more like revolution, and sometimes people only listen to you when you make enough noise that they can't ignore. I'm not saying it is right, but they are fighting for where they live, and their demands are not unlike a bill of rights that was drafted here in America.
Roger Elliott  |  June 01, 2016
There (are) a lot better ways than terrorism to get a point across. This type of activity just drives away the oil companies that don't have a interest in the fight.
Les Skinner  |  June 01, 2016
Like the French during their revolution. Didnt like the price of bread, so they burned the bakeries. This will no doubt help the cause of the rebels.
john weaver  |  June 01, 2016
Is this the way to stop pollution, who is going to clean up ? the NDA ? Oill companies will walk away , no reason to stay
clemmtec  |  June 01, 2016
you are distroying your area fool
RELATED COMPANIES
Company: ENI more info