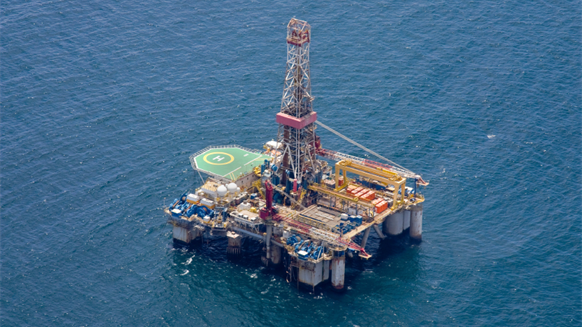 For workers laboring on top of tall structures, the ability to self-rescue could mean the difference between life and death.

While transportation incidents represented the largest cause of U.S. workplace deaths, workers also face serious threats from falling. Fourteen percent, or 660, of the 4,821 U.S. worker fatalities in 2014 resulted from falls to a lower level of a facility, according to the U.S. Bureau of Labor Statistics (BLS).

Saint Paul, Minn.-based 3M is seeking to address this risk with its new line of fall protection products, including a safety harness, personal protection equipment, fall protection devices for tools and the latest ‘self-rescue device.’

Being suspended in a harness puts pressure on the legs and can cause suspension trauma. This trauma can render them unconscious, making a rescue difficult, Steve Kosch, global product manager of 3M’s confined space and rescue division, told Rigzone in an interview at the Offshore Technology Conference earlier this month in Houston. The self-rescue device not only allows a trapped worker to free themselves; if they’ve already passed out, an extended pole can be used to unhook the carabiner and rescue them from heights.

“You don’t have to be at extreme heights to hurt yourself,” Kosch said. “Most countries, including the United States, require some kind of fall protection for six feet and higher.”

The number of workers who perished in a fall in 2014 was 11 percent higher than the total deaths by falls in 2013. In the 545 cases where the height of the fall was known, nearly two out of every three were falls from 20 feet or less, according to BLS.

The number of fatalities in the oil and gas extraction, mining and quarrying industry sector grew 18 percent to 183 in 2014 from 2013. The fatal injury rate in this sector also increased to 14.2 per 100,000 full-time equivalent workers. The number of fatal injuries in the oil and gas extraction industries reached 144 in 2014, a new high for the group.

The self-rescue device is attached to the dorsal webbing of the user’s harness, Kosch explained. Normal fall arrest equipment, such as a lanyard or self-retracting device, is attached to the D-ring on the self-rescue. If the worker falls, the lanyard or self-retracting device will arrest the fall. The person can then perform self-rescue by pulling up on the red tab on the release cord shoulder strap to expose the red pull handle. The worker then grasps the red pull handle and pull the release cord firmly to release the D-ring and start the descent. After they land on the ground and the release cord is pulled, the weight of the user pulls rope from the spool, which passes through the breaking system. The speed is controlled by the brake.

The device is not intended to replace existing rig scape systems that are required by American Petroleum Institute Association standard 54. Kosch noted that the Occupational Health and Safety Administration requires all employers to have a rescue plan in place when people are working at height and the risk of a fall exists. The device is intended for use by workers at height within a 100-foot distance from a lower platform or ground. 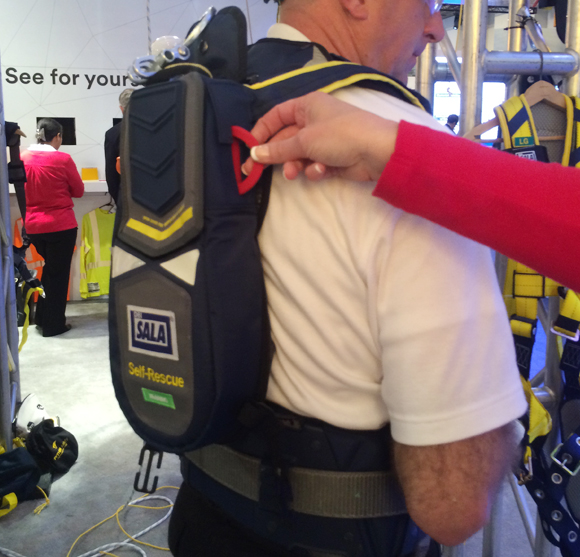 Brandon Jones  |  May 16, 2016
Can the release be pulled with the person still suspended, allowing him to fall?
RELATED COMPANIES
Company: 3M more info