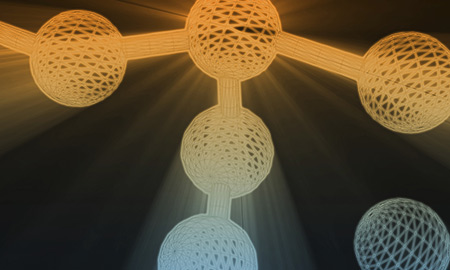 "The use of nanomaterials opens up a whole new dimension," said Patrick Sullivan, founder and CEO of Oceanit. The company's "Anhydra" coating technology manipulates the properties of a surface at the nanoscale –1,000 times smaller than a human hair, he noted.

"If you can control surfaces at that scale, you can create structures with specific performances that would otherwise be impossible," continued Sullivan. "Being able to control something on that scale and then scaling it out creates tremendous efficiencies."

In the case of its original application as an antifouling coating to reduce drag on the hulls of naval vessels, Anhydra enables ships to go faster without expending extra energy for propulsion, Sullivan said. The coating helps surfaces to behave differently and actually extends the service life of the material to which it is applied, he explained.

Oceanit is researching and developing new formulations of Anhydra for the military as well as the aerospace, healthcare and oil and gas industries. In the latter case, the company sees considerable potential for the technology to enhance and protect metallic surfaces exposed to a wide range of temperatures and pressures both offshore and onshore. One potential application is an internal pipeline coating that repels crude oil – and the water and other constituents in it – in order to improve flow and prevent corrosion, Sullivan said. The technology's "ice-phobic" properties could also prevent methane hydrates from accumulating in subsea pipelines, he added.

"In the oil and gas industry it's a huge thing because if you can reduce the drag in a pipeline, that means for the same pump you get more distance or you can move material with the same amount of energy."

Aside from easing product movement inside pipelines, Oceanit's nanotech coating could also protect the exterior surfaces of pipelines, offshore platforms and myriad other oil and gas infrastructure from corrosion, added Sullivan. Coatings could be designed to repair scratches and abrasions, protect a metallic surface from the elements and preempt the onset of corrosion, he explained.

Oceanit's work on oil and gas applications of Anhydra has been limited to the laboratory, but the company has been actively courting industry players to partner in the critical step to scale up the technology.

"We'll develop the technology in a lab setting and then work collaboratively with an operator that will use it" in the field, Sullivan explained.

In addition to opening an office in the world's energy capital Houston, Oceanit has stepped up its presence at major oil and gas events such as the recent Offshore Technology Conference and will be on-hand at International Association of Drilling Contractors and Society of Petroleum Engineers events this fall. The company's outreach efforts to date have been fruitful, Sullivan noted.

"We're in some discussions right now, we're testing with some operators and and going to scale with some others," he said, adding that Oceanit has been in "very preliminary" talks with manufacturers. "We're always looking at how to go to scale because this industry is all about scale."

Oceanit also is in the process of deploying one of its high-performance coatings in the field, said Vinod Veedu, the company's Houston-based director of strategic initiatives.

"We've quickly scaled up from the laboratory to the field in a matter of months," Veedu concluded. "It's an exciting time to be supporting this fast-moving industry."