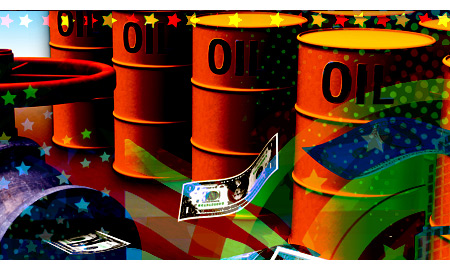 John Kemp is a Reuters market analyst.
The views expressed are his own.

LONDON, Jan 28 (Reuters) - North America's energy revolution is remaking all aspects of the global economy and international relations in what has turned out to be the most profound shift in the second decade of the 21st century.

Policymakers and climate scientists prefer to talk about the transformational potential of clean technologies like wind, solar and electric vehicles.

But in reality the biggest shifts in economic relations and the balance of power at present stem from changes in the production of decidedly old-fashioned and polluting fossil fuels such as oil and gas.

Hydraulic fracturing, coupled with tougher fuel-economy standards and increased use of biofuels, has reversed the growing dependence of the United States on energy imports in less than 10 years.

If fracking has not yet made the United States "energy independent", it has certainly created a crucial source of competitive advantage and given policymakers much more room to manoeuvre.

By the start of the century, the cost of importing energy was one of the largest burdens on the U.S. trade balance, and threatening to worsen in the medium term.

Crude oil and refined petroleum products such as gasoline accounted for most of the imported energy, but there was growing concern that the country would also become a big net importer of natural gas within a few years.

In 2008, the United States ran a net energy trade deficit with the rest of the world amounting to $411 billion, 2.8 percent of GDP.

Crude petroleum and refined products accounted for around one-third of the record trade deficits which the United States ran between 2004 and 2008.

But 2008 proved to be the high-water mark for the net cost of energy imports.

There is no mystery about the cause of the U.S. energy revolution.

The quadrupling of oil prices between 2000 and 2008 was directly responsible for the biofuel-blending mandates and fuel efficiency standards contained in the 2005 Energy Policy Act and 2007 Energy Independence Security Act passed by the U.S. Congress.

It also indirectly supported the swift rollout of fracking technology, first in natural gas and from 2008 onwards in oil, as well.

But the consequences of the energy revolution are only now being felt fully.

For years, policymakers and commentators have played down the revolution's impact, or even denied there is a revolution at all, because it clashes with climate policies and threatens to re-arrange international relations in ways that are uncomfortable to many of those concerned.

Sceptics first suggested the upsurge in energy production would prove temporary, then that it would be limited to gas, and now that it will be contained by restrictions on U.S. oil exports or environmental campaigns to keep fossil fuels underground unburned.

Doubters say it cannot be repeated in other countries because of their very different geological conditions as well as political and commercial environments.

But the revolution's impact has spread far beyond the United States.

The United States is set to become a significant exporter of natural gas. It is already the world's fastest-growing exporter of gas liquids such as propane.

Coal exports have risen as the country's own power stations turn to cheaper gas. And U.S. refiners are becoming increasingly important exporters of diesel.

Energy trade is already finding ways around the patchwork of antiquated restrictions on exports of oil, gas and condensates.

At the same time, the United States depends less and less on imported energy, especially from outside North America.

In 2013, the country is expected to have imported the fewest barrels of crude oil since 1994.

Even that probably understates the speed of the transformation and its impact on the trade deficit. In real terms, the trade deficit in petroleum and related items in November 2013 was the narrowest for well over two decades.

The economic impact has been profound. Abundant supplies of cheap domestic energy are now a crucial source of competitive advantage compared with rival economies in Europe and Asia.

A decade ago, U.S. policymakers and commentators were worrying about the loss of manufacturing to China based on cheap labour.

Now cheap energy is encouraging talk of bringing some of that manufacturing back. By contrast, expensive energy and inefficient fuel consumption are a seen as a growing threat to China's competitiveness.

European manufacturers, too, worry they will be significantly disadvantaged by more expensive energy bills.

The energy revolution's impact on international relations has been even greater, and nowhere is it more visible than in the Middle East.

For years, the foreign policy establishments in both the United States and in capitals around the Gulf have insisted shale production will not loosen the close ties between Washington and its regional allies, especially Saudi Arabia.

But the scale of the shift has become too obvious to deny.

Speaking to a security conference in Tel Aviv on Tuesday, Israel's outspoken Defence Minister Moshe Yaalon complained that the United States is "detaching" itself from the Middle East, according to reports carried in the Jerusalem Post.

Saudi Arabia's leaders clearly fear their own alliance with Washington is being downgraded as the Obama Administration pursues detente with Iran.

Tensions between Washington and Riyadh erupted into the open last year when Saudi Arabia declined to take up its seat on the UN Security Council and undertook a series of other carefully calculated diplomatic moves to signal its displeasure with the White House.

Such an open breach between the two close allies would have been unthinkable in 2005 or 1995 let alone 1985 or even 1975, when the United States felt its dependence on Saudi oil exports keenly.

Even more remarkably, U.S. foreign policymakers have largely ignored the protests coming from Tel Aviv and Riyadh, and forged ahead regardless.

Ultimately, it is the energy revolution that has emboldened U.S. policymakers to pursue a very different course in the Middle East.

The idea of the United States exporting fossil fuels to the Persian Gulf would have laughable five years ago. But in what has to be the supreme irony, the United Arab Emirates is now openly talking about importing cheap shale gas from the United States to meet its surging electricity demand.

Middle East oil producers are not the only countries that have been disconcerted by the shale revolution. It is also altering the relationship between China and the United States.

In effect, the two superpowers have swapped places. In 1973, the United States perceived its growing reliance on imported crude from the Middle East was a key strategic weakness, while China's rapidly developing Daqing super-giant oil field promised greater energy independence.

Now U.S. reliance on the Middle East is loosening, while China is increasingly aware of the risks of relying on importing oil from unstable parts of the Middle East and Africa via long supply routes through the straits of Hormuz and Malacca and the South China Sea.

Once again, shale, and the energy revolution more broadly, lies at the heart of the fundamental shift in the balance of power.

China's own policymakers attach the highest strategic priorities to developing their own domestic energy production (including from shale), cutting energy consumption through improvements in energy efficiency, and protecting foreign supplies by projecting diplomatic and military power into key supply regions and along supply routes.

Just like the discovery of oil in Pennsylvania in the 1850s and the Middle East between the 1920s and 1950s, the North American energy revolution is remaking the world order.