How do Mooring Systems Work?

A mooring system is made up of a mooring line, anchor and connectors, and is used for station keeping of a ship or floating platform in all water depths. A mooring line connects an anchor on the seafloor to a floating structure. We will focus on mooring Mobile Offshore Drilling Units and Floating Production Systems. 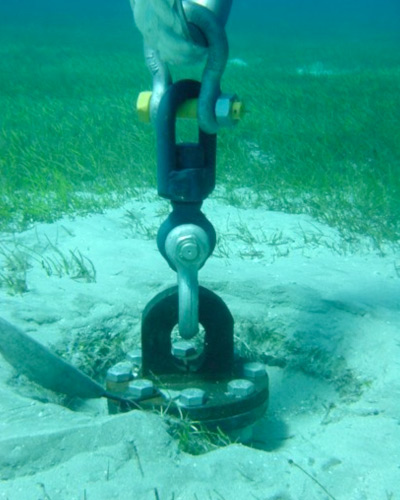 The mooring line can be made up of synthetic fiber rope, wire and chain or a combination of the three. Environmental factors - wind, waves and currents - determine which materials make up the mooring system.

The mooring system relies on the strength of the anchors. The holding capacity of anchors depends on the digging depth and the soil properties. The mooring lines run from the vessel to the anchors on the seafloor. Anchor types include: drag embedment, suction and vertical load.

A drag embedment anchor (DEA) is the most utilized anchor for mooring floating MODUs in the Gulf of Mexico. The drag anchor is dragged along the seabed until it reaches the required depth. As it penetrates the seabed, it uses soil resistance to hold the anchor in place. The drag embedment anchor is mainly used for catenary moorings, where the mooring line arrives on the seabed horizontally. It does not perform well under vertical forces.

Suction piles are the predominant mooring and foundation system used for deepwater development projects worldwide. Tubular piles are driven into the seabed and a pump sucks out the water from the top of the tubular, which pulls the pile further into the seabed. Suction piles can be used in sand, clay and mud soils, but not gravel, as water can flow through the ground during installation, making suction difficult. Once the pile is in position, the friction between the pile and the soil holds it in place. It can resist both vertical and horizontal forces. 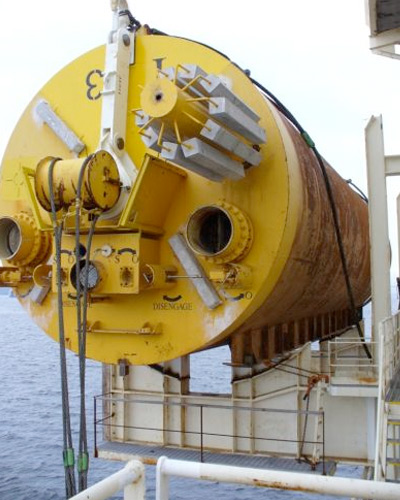 Vertical load anchors are similar to drag anchors as they are installed in the same way. However, the vertical load anchor can withstand both horizontal and vertical mooring forces. It is used primarily in taut leg mooring systems, where the mooring line arrives at an angle the seabed.

There are six types of mooring systems discussed below. They include catenary, taut leg, semi-taut, spread, single point and dynamic positioning.

The tout leg system typically uses polyester rope that is pre-tensioned until taut. The rope comes in at a 30 to 45 degree angle on the seabed where it meets the anchor (suction piles or vertically loaded anchors), which is loaded vertically. When the platform drifts horizontally with wind or current, the lines stretch and this sets up an opposing force.

The semi-taut system combines taut lines and catenary lines in one system. It is ideally used in deepwater.

A spread mooring system is a group of mooring lines distributed over the bow and stern of the vessel to anchors on the seafloor. The vessel is positioned in a fixed heading, which is determined by the sea and weather conditions. The symmetrical arrangement of anchors helps to keep the ship on its fixed heading location. The spread mooring system does not allow the vessel to weathervane, which means to rotate in the horizontal plane due to wind, waves or current. Spread mooring is versatile as it can be used in any water depth, on any vessel, in an equally spread pattern or a group. 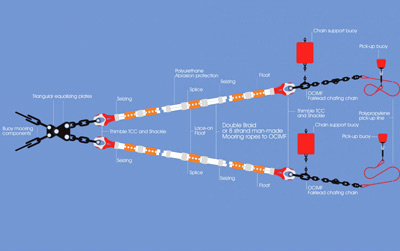 A single point mooring system connects all the lines to a single point. It links subsea manifolds connections and weathervaning tankers, which are free to rotate 360 degrees. The single point system includes a buoy, mooring and anchoring elements, product transfer system and other components.

Dynamic positioning does not use mooring lines. Instead a computer controls the vessel's thrusters and propellers to maintain position. DP can be used in combination with other mooring systems to provide additional redundancy.