Training  >>  How It Works  >>  How Does Well Acidizing Work to Stimulate Production?
HOW IT WORKS

How Does Well Acidizing Work to Stimulate Production? 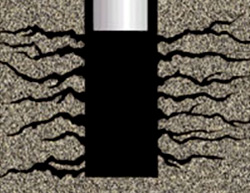 There are different acids used to perform an acid job on wells. A common type of acid employed on wells to stimulate production is hydrochloric acids (HCI), which are useful in removing carbonate reservoirs, or limestones and dolomites, from the rock. Also, HCI can be combined with a mud acid, or hydrofluoric acid (HF), and used to dissolve quartz, sand and clay from the reservoir rocks.

In order to protect the integrity of the already completed well, inhibitor additives are introduced to the well to prohibit the acid from breaking down the steel casing in the well. Also, a sequestering agent can be added to block the formation of gels or precipitate of iron, which can clog the reservoir pores during an acid job.

After an acid job is performed, the used acid and sediments removed from the reservoir are washed out of the well in a process called backflush.

For more information about reservoir stimulation, take a look at How Does Well Fracturing Work to Stimulate Production?