Used to find oil and gas prospects, there are multiple types of seismic surveys that can be produced over reservoirs to understand the subsurface environment. Made up of reflection and refraction mapping, seismic surveys give geologists a better idea of what lies beneath the surface - or even below thousands of feet of water.

One of the most intricate forms of seismic survey, 4-D (four-dimensional) seismic, is a type of geophysics. Also known as time lapse seismic, 4-D seismic incorporates numerous 3-D seismic surveys over the same reservoir at specified intervals of time. Studying multiple time-lapsed 3-D surveys, or three-dimensional subsurface images, portrays the changes in the reservoir over time. 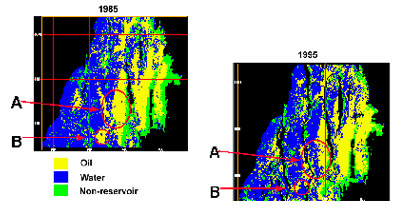 Changes in a Reservoir Seen through 4-D SeismicSource: Schlumberger

Four-D seismic can determine changes in flow, temperature, pressure and saturation. By scanning a reservoir over a given period of time, the flow of the hydrocarbons within can be traced and better understood. For example, as hydrocarbons are depleted from a field, the pressure and composition of the fluids may change. Additionally, geologists are interested in understanding how the reservoir reacts to gas injection or water flooding. Furthermore, 4-D seismic can help to locate untapped pockets of oil or gas within the reservoir.

Typically, 4-D seismic data is processed by subtracting the data from one survey from the data of another. The amount of change in the reservoir is defined by the difference between the two. If no change has occurred over the time period, the result will be zero.

In addition to 4-D seismic, 4-C seismic encompasses multi-component seismic exploration, outlining both compressional and shear waves given off by a seismic source. 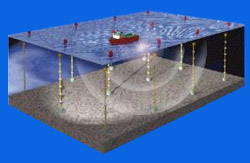 While a compressional wave, also known as a P-wave, is how sound travels through the air, where particles travel closer and then farther apart; a shear wave, or S-wave, is similar to an ocean wave, where the particles actually move up and down.

P-waves travel at a higher rate of speed, and unlike S-waves, P-waves are able to pass through liquids and gases. While compressional waves are distorted by gas in the reservoir, shear waves are not affected, making shear waves a better measurement to determine gases in the sedimentary rocks.

Four-C seismic is used to pinpoint and determine the locations of subsurface fractures, as well as define the make-up of the sedimentary rock layers and their corresponding fluids.