What Is EOR, and How Does It Work?

Oil production is separated into three phases: primary, secondary and tertiary, which is also known as Enhanced Oil Recovery (EOR). Primary oil recovery is limited to hydrocarbons that naturally rise to the surface, or those that use artificial lift devices, such as pump jacks. Secondary recovery employs water and gas injection, displacing the oil and driving it to the surface. According to the US Department of Energy, utilizing these two methods of production can leave up to 75% of the oil in the well.

The way to further increase oil production is through the tertiary recovery method or EOR. Although more expensive to employ on a field, EOR can increase production from a well to up to 75% recovery. 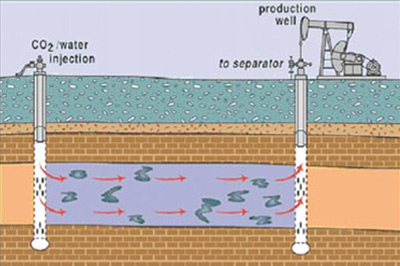 Used in fields that exhibit heavy oil, poor permeability and irregular faultlines, EOR entails changing the actual properties of the hydrocarbons, which further distinguishes this phase of recovery from the secondary recovery method. While waterflooding and gas injection during the secondary recovery method are used to push the oil through the well, EOR applies steam or gas to change the makeup of the reservoir.

Whether it is used after both primary and secondary recovery have been exhausted or at the initial stage of production, EOR restores formation pressure and enhances oil displacement in the reservoir.

There are three main types of EOR, including chemical flooding, gas injection and thermal recovery. Increasing the cost of development alongside the hydrocarbons brought to the surface, producers do not use EOR on all wells and reservoirs. The economics of the development equation must make sense. Therefore, each field must be heavily evaluated to determine which type of EOR will work best on the reservoir. This is done through reservoir characterization, screening, scoping, and reservoir modeling and simulation. 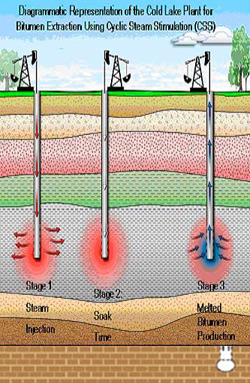 Chemical injection EOR helps to free trapped oil within the reservoir. This method introduces long-chained molecules called polymers into the reservoir to increase the efficiency of waterflooding or to boost the effectiveness of surfactants, which are cleansers that help lower surface tension that inhibits the flow of oil through the reservoir. Less than 1% of all EOR methods presently utilized in the US consist of chemical injections.

Gas injection used as a tertiary method of recovery involves injecting natural gas, nitrogen or carbon dioxide into the reservoir. The gases can either expand and push gases through the reservoir, or mix with or dissolve within the oil, decreasing viscosity and increasing flow. 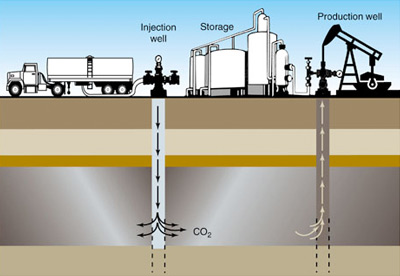 Carbon dioxide EOR (CO2-EOR) is the method that is gaining the most popularity. While initial CO2-EOR developments used naturally occurring carbon dioxide deposits, technologies have been developed to inject CO2 created as byproducts from industrial purposes.

Other EOR applications gaining acceptance are low-salinity water flooding, which is expected to increase production by nearly 20%, and well stimulation, which is a relatively low-cost solution because it can be employed to single wells (rather than the whole reservoir).

Although EOR applications are predominantly employed onshore, technologies are being developed to expand the reach of EOR to offshore applications. Challenges that presently exist for offshore EOR include economics of the development; the weight, space and power limitations of retrofitting existing offshore facilities; and fewer wells that are more widely spaced contributing to displacement, sweep and lag time.

Currently, the application of EOR is being considered for a number of offshore developments. With successful subsea processing and secondary recovery methods employed in offshore environments through water and gas injection, the technologies to apply EOR methods is quickly nearing.

EOR in the US

The US Department of Energy estimates that currently there are 89 billion barrels of additional oil trapped in onshore reservoirs. This is in great contrast to the country's current domestic proven reserves, which is estimated at 21.9 billion barrels. The DOE stresses that much of this production could be tapped by implementing EOR methods, namely the injection of carbon dioxide. 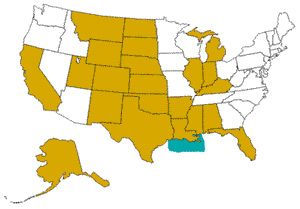 In fact, the governmental agency claims that the pervasive application of EOR technologies on US reserves could increase the country's oil recovery from approximately 30% to more than 60%. If this oil was added to the US proven reserves, the country would rank fifth in the world for the size of its reserves.

If this oil could be recovered, the country's dependence on foreign oil would be greatly depreciated, an effort for which the US has been striving. However, a wider application of EOR methods on US reservoirs requires a much higher cost of production, and the price of oil must legitimize the investment.

We are a global business delivering safety and competence services across the world, helping our customers protect their people, assets and the environment.
Learn More