Training  >>  How It Works  >>  How Does Marine Seismic Work?
HOW IT WORKS

How Does Marine Seismic Work?

The significant financial perils of drilling an unsuccessful well on dry land are only magnified when the unprofitable well is drilled in several thousand feet of water. Rig costs alone can top half a million dollars per day, with companies standing to lose a fortune should their expensive investments come up empty-handed. Fortunately, seismic surveys can save companies hundreds of millions of dollars by giving them precise information about subsurface features and even the presence of oil.

In essence, seismic surveys are a way to probe beneath the surface to "see" underlying features that make up the underground structure of a prospect. Such features can give companies a more astute indication if a prospect contains hydrocarbons. 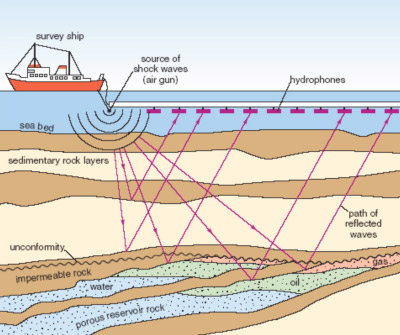 As the name suggests, seismic surveys use surface-induced seismic pulses to image subsurface formations. Basically, a seismic wave is generated underneath the earth's surface, and then picked up by sensors called "geophones" as the waves bounce off subsurface formations -- that is, layers of rock beneath the surface. This process becomes more complicated when there are hundreds or thousands of feet of water between the earth's surface and the geophones.

In land seismic, the methods for generating seismic waves in the substrate are rather simple. Dynamite and a process called vibroseis (high-frequency replication) are the most practical and common. However, dynamite use has been discontinued in marine seismic, because of the danger of harming marine life, low repetition rates and the expense of employing two ships necessary for the process.

Instead, marine seismic vessels use a combination of air guns, water guns and other acoustic sources to create the pulse needed to take seismic readings.

The water gun (or a combination array consisting of several sources) is preferable to the air gun, because the air gun generates an unwanted secondary pulse after initially being fired, which obscures the waveform that can disturb the proper interpretation of the data. The water gun injects water into the surrounding water, resolving the problem caused by compressed air. The point is to produce an acoustic vibration that can be read by the geophones and interpreted to reveal the geologic features underneath the seafloor.

There are other methods as well, including a source that produces a chirp, or "swept" frequency. This method uses a series of frequencies based on "chirp radar" to supply the reflected pulse. The various sources emit a variety of frequencies in order to give a more accurate read of the subsurface terrain.

Whatever the acoustic source, the goal is to produce seismic pulses that reflect off of the boundaries between various layers of rock, all of which will cause the sound wave to react differently. It is important that the pulse be emitted in rhythmic repetition as the vessel moves to create a detailed length of mapping.

Regardless of which method is used, the returning pulses are picked up by an array of geophones attached to lines towed by the ship. These arrays are called "streamers," and consist of long net-like bands with geophones spaced evenly along the streamer. 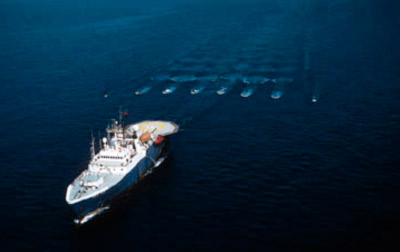 The information gathered by the geophones is collected into an analog signal, before being converted to a digital signal and relayed to computers on the ship. The computers translate the information into digital maps of the subsurface, which geophysicists and geologists can analyze to determine the presence of hydrocarbons, which can save oil companies the gamble of sinking an unprofitable well. While seismic may be expensive, it ultimately pays off, because it allows companies to hedge their bets, minimizing their potential loss and maximizing their potential gains.