How Does Land Seismic Work?

Drilling for oil is an expensive gamble: With project costs rising every year, an oil company can stand to lose an incredible amount of money exploring or developing a property that fails to yield hydrocarbons in commercial rates. When faced with these risks, companies do all they can to hedge their bets, to be as sure as possible that their investment has a good chance of making money. Companies want to know as much as possible about the potential profitability of a property before they begin developing it, and seismic surveys are one of the primary ways they learn about a prospect’s production potential.

In essence, seismic surveys are a way to probe beneath the surface to "see" underlying features that make up the underground structure of a prospect. Such features can give companies a more astute indication if a prospect contains hydrocarbons.

"In addition to delineating subsurface structures, seismic data can be computer processed for 'attributes' such as Amplitude Versus Offset, or AVO, which can serve as a Direct Hydrocarbon Indicator (DHI)," said Carl Lothringer, a petroleum geologist at St. Mary Land and Exploration. AVO shows the lithology and fluid content variations in rocks, allowing geologists to model other fluid contents. "Such DHIs are as close to directly identifying oil or gas in the subsurface as geophysicists can get." 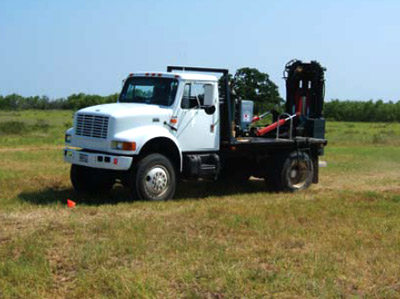 As the name suggests, seismic examines surface-induced seismic pulses to image subsurface formations. Basically, a seismic wave is generated underneath the earth's surface, and then picked up by sensors called "geophones" as the waves bounce off subsurface formations - that is, layers of rock beneath the surface. There are two primary means of generating these waves: with dynamite and with a process called vibroseis.

Dynamite is the simpler and generally preferred source, but for several reasons it is limited to open areas, such as fieldsand farmlands. Dynamite is also the only practical energy source in swampy areas, such as much of Southern Louisiana. Quite simply, dynamite is buried and then set off. The resulting explosions generate the requisite underground reverberation, which is then relayed via geophones to a special recording truck.

The other common method, more frequently seen in populous areas or places in which dynamite is impractical, is vibroseis. Vibroseis uses large, purpose-built trucks as the source of the seismic waves. Five or six trucks are commonly used to create enough energy for the procedure. Simultaneously, these trucks then begin to generate energy of increasing frequency over the period of several seconds. Like with the dynamite method, the resulting reverberations are measured by geophones, with the data being sent to a recording truck.

The rough signal is then filtered and processed to edit out background noise and produce a clean, sharp final signal.

The simplest and oldest form of seismic work is called 2D. In 2D, the seismic data is collected over a loose grid pattern, with the lines of the grid often conforming to local roads for ease of access. The lines may be several miles apart. While 2D can give geologists a good general understanding of an area, its reliance on relatively few cross sections means that such seismic surveys can result in considerable structural uncertainty between lines.

By the early 1980s, technological advances made so-called 3D seismic possible. 3D essentially conforms to the same methods as 2D, but uses a dense array of geophones to provide a much more detailed set of seismic information. 3D seismic information allows geologists to see a significantly more reliable view of the underground topography of an area. Denser data and improved computer processing ensures that subsurface features are correctly located, and can reveal the previously mentioned DHIs, which indicate the presence of hydrocarbons, rather than merely the structural elements, which could possibly contain hydrocarbons.

Because of advances in computer power and recording ability, 3D is very commonplace today. While more expensive than traditional 2D seismic, the increased effectiveness and reliability of 3D seismic usually make it well worth the price.

An advance on the premise of 3D seismic is called 4D seismic. This method involves 3D seismic acquired on a given area multiple times over an extended period of time. This enables companies to track depletion in a field and allows the identification of areas in a mature field that have not yet been tapped.