Training  >>  How It Works  >>  How Does Blowout Control Work?
HOW IT WORKS

How Does Blowout Control Work?

If not properly monitored, changes in pressure that can occur while the well is being drilled can cause combustible hydrocarbons to flow unchecked and at high pressures and flow rates. If this flow of hydrocarbons is not stopped in time, the hydrocarbons can ignite into a deadly firestorm called a blowout. Because of the immense cost and danger associated with oil well blowouts, the bulk of the well control industry revolves around the prevention and avoidance of blowouts. Unfortunately, because a blowout only takes a brief moment to occur, it is necessary that there be methods in place to combat them when the need arises. 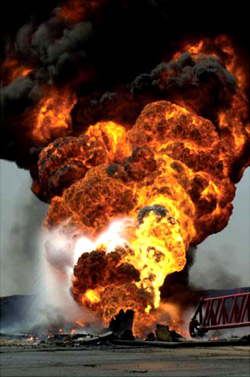 In a nutshell, "a blowout is an uncontrolled flow of gas, oil or other formation fluids into the atmosphere or another zone," explained Barry Cooper of Well Control School, an organization, which has offered well control training programs to the oil and gas industry for more than 25 years.

"Blowouts are the most tragic and expensive accidents in the upstream petroleum industry," said Cooper. "They endanger life, the environment and future production from the lost well." On an economic level, an oil well gushing thousands or even millions of barrels of oil is costing a company not only in short term production, but also the long-term profitability of the well itself. It is vital to the profitability of the well that the blowout is stopped and the well put back online as quickly as possible.

Today, companies like Boots & Coots, which variously spun off from the Red Adair Company, continue in the same tradition. While the technology has improved significantly over the past 85 years, the basic methods and strategies employed to battle blowouts have remained the same.

"The technology may change, but the basics have been around since the `20s, [developed by] Mr. Kinley and Mr. Adair," said Danny Clayton, Boots & Coots vice president of well control services. The profession is based on tradition, with each generation of oil well firefighters teaching the next generation.

"Technology may improve, but the method is always about the same," said Clayton.

Most commonly, when a well is lost to a blowout, the drilling package will have collapsed around the well, making proper assessment of the situation difficult. Firefighters arrive as quickly as possible and use machinery to remove the damaged rig and associated debris so they can assess the situation and choose the best method to fight the blowout.

In the early days of fighting oil well fires, the most common technique to smother a blowout was to snuff it with a dynamite blast. Pioneered by Myron Kinley, the intention is to blast fuel and oxygen away from the flame, effectively eliminating the fuel source, similar to snuffing out a candle. Although the first instance of this method dates back to 1913, dynamite blasting continues to be one of the most frequently employed methods.

Another common method employed by oil well firefighters involves drilling a "relief" well or wells into and intersecting the blowing well. This intersection gives the kill fluid a conduit to the surface, enabling what is called a "subsurface kill."

A more complicated method for bringing a blown-out well under control involves carefully capping the well with a new blowout preventer, or "BOP." BOPs are essentially large valves on the surface of the well that quickly shut off the well as a last ditch precaution to prevent a blowout from occurring.

In this procedure, the detritus of the collapsed rig is carefully removed and a high-pressure abrasive cutter is used to sever the damaged BOP and wellhead for removal. A long boom assembly - at the end of which is a replacement BOP - is maneuvered into position. Large amounts of water are sprayed on the replacement BOP to combat the flames and to keep the replacement BOP from getting too hot. The BOP is quickly lowered onto the well and bolted into place, thus capping the blowout.

Like all forms of firefighting, oil well firefighting requires constant vigilance, attention and teamwork for the safe completion of the job. But sometimes, outside factors complicate the sealing of a well.

Not all blowouts necessarily ignite into towering infernos. Sometimes, the hydrocarbons merely blow into the air, which can actually be more dangerous. Often, firefighters will deliberately ignite the blowout as a precaution.

"If it's burning, we know it's doing all it can do," Clayton said. "We tend to like to have them burning." If the explosive fuel does not ignite, firefighters run the risk of being in the middle of a giant tinderbox that could go up in flames at any moment.

The Future of Blowout Control

Blowout control and oil well firefighting are based on tradition and apprenticeship. Advances in technique and technology only underscore the inherent consistency in the industry.

"There's no magic cure," said Clayton. Technological advances may help, but ultimately the accomplishment of safely bringing a lost well back online is reliant on the competence and actions of oil well firefighters.