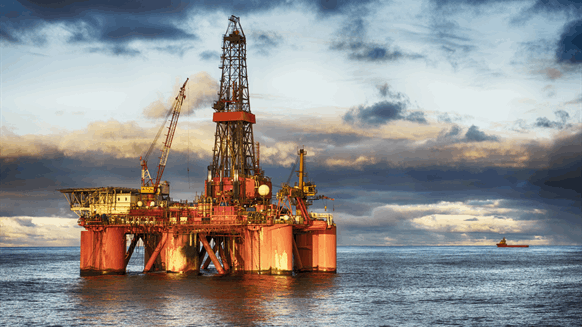 After 4 years of cutbacks, oil companies are poised to open their wallets again and develop new offshore fields, but the benefits won't be spread equally.

(Bloomberg) -- After four years of cutbacks, oil companies are poised to open their purses again and develop new offshore fields, although the benefits won’t be spread equally across the companies who provide them everything from seismic surveys to pumps and turbines.

The long-awaited spending rebound will re-energize oil-services providers that have survived the deepest crisis in a generation thanks to cost cuts, mergers and sometimes painful debt restructuring. But for some debt-laden suppliers, the investment pickup may come too late.

Notwithstanding recent oil-price volatility, spending on offshore oilfield services will rise by 6 percent in 2019 reaching $208 billion, before surging by another 14 percent in 2020, according to Norwegian consultancy Rystad Energy AS. That’s after almost halving since 2014.

Oil producers will probably commit to 110 new undersea projects this year, up from 96 in 2018 and just 43 in 2016 -- when the industry slashed capex as oil slumped.

The market for subsea equipment may expand by between 13 percent and 14 percent each year through 2023, said Audun Martinsen, head of oilfield service research at Rystad, in an interview. This is in part as suppliers resume to hike prices.

Oilfield surveyors and providers of support and maintenance services should rebound at a slower pace as an overcapacity of vessels continues to glut the market and the rigs sector, the worst performing segment in offshore last year, should improve at last, Martinsen said.

London-based oilfield services provider TechnipFMC Plc forecast that 2019 revenue at its subsea division will climb but margins may fall. This year the company is anticipating “continued strong activity” for investment decisions in small-to-mid-size projects, and “an increasing number of the larger greenfield subsea projects,” Chief Executive Officer Doug Pferdehirt said in December.

“A lot of these offshore projects are located at deep waters,” benefiting subsea gear makers such as TechnipFMC and Subsea 7 SA, Rystad’s Martinsen said.

While oil and gas companies press ahead with new developments, they may initially focus on already-discovered fields, while keeping a cautious stance on riskier exploration projects, for which returns are harder to reap, forcing surveyors and drillers to send more vessels and rigs to scrap.

“With oil prices trading below $60 per barrel, there continues to be some uncertainty on 2019 E&P spending, particularly offshore,” Kristian Johansen, CEO of Norwegian oilfield surveyor TGS Nopec Geophysical Co. ASA said on Jan. 9.

However, TGS should benefit from its “solid balance sheet,” while Petroleum Geo-Services ASA may face “challenges ahead in terms of an oversupplied seismic vessel market and approaching debt maturities,” Nordea analysts Glenn Lodden and Even Mostue Naume wrote in a note this month. France’s CGG SA should be more attractive once it completes a plan to shed its remaining seismic vessels. Although restructuring takes time and the company may incur additional costs, the analysts said. A CGG spokesman declined to comment.

There should be a “slight rise in demand from drilling,” meaning that just 30 percent of deepwater rigs may remain idle this year, down from 35 percent last year, Mhairidh Evans, an analyst at Wood Mackenzie, said in an interview. “Some more overcapacity needs to be taken out of the supply chain.”

Transocean Ltd, which last month announced an $830 million drilling contract, may benefit from the rebound as it focuses on deepwater, while Shelf Drilling Ltd. may also gain from its exposure to the Middle East, said Rystad’s Martinsen.