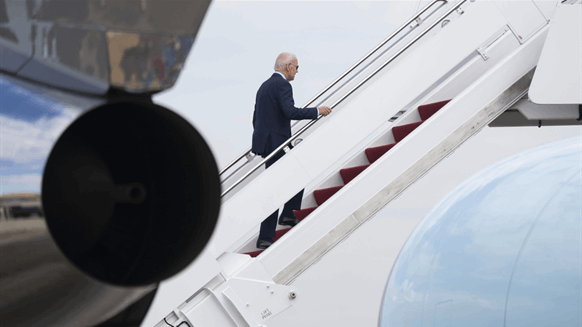 Biden's threat to slap a tax on oil-company profits is more bluster than a threat as the clock runs out on his efforts to tame fuel prices ahead of midterm elections.

President Joe Biden’s threat to slap a tax on oil-company profits is more bluster than a threat as the clock runs out on the administration’s efforts to tame fuel prices ahead of midterm elections.

Democrats have tried, and failed, for more than a decade to impose a so-called “windfall” tax on oil companies without success. With an evenly divided Senate and an eight-seat majority in the House looking increasingly vulnerable, Biden’s threat to tax what he described as the industry’s “windfall of war” will be nearly impossible to achieve.

This should be viewed “as a political message ahead of the midterms rather than a serious policy proposal with the potential to become law,” Height Securities LLC said in a note to clients Tuesday. “The proposal primarily serves as a means to deflect Republican attacks blaming the Biden administration for high fuel prices and inflation, which are central to voters’ concerns heading into the midterms but that the administration has little power to change,” the note said.

The idea of imposing a tax on oil companies’ profits garnered renewed attention among progressives in Congress after gasoline prices spiked to more than $5 a gallon this summer. Governor Gavin Newsom added his voice to the chorus and has asked California’s legislature to consider a similar tax in the state that would provide rebates to consumers.

Biden said he would work with Congress to look at what measures they could take against companies that fail to reinvest profits to increase oil production and refining capacity.

At a rally in Florida on Tuesday, Biden said, “Look, Putin’s invasion of Ukraine sent gas prices soaring around the world. But because of the actions we’ve taken, gas prices are coming down here at home.”

“In the last six months, while the rest of the country was going through hell, six of the largest oil companies made more than $100 billion in profits.”

The West’s five-biggest oil companies made more than $60 billion in the second quarter, beating the previous record set in 2008 by nearly 50%. Exxon announced Friday it surpassed even its record second-quarter results by earning $19 billion in just three months, or the equivalent of about $206 million a day.

Any effort would have to clear a 60-vote threshold in the Senate unless Democrats attempted the maneuver using the budget reconciliation process, which would require a simple majority for passage. Democrats have a short window after the midterm elections and before the end of the year to try that option. They would need to convince a likely skeptical Senator Joe Manchin and other moderate Democrats to go along with the plan.

The US enacted a windfall profit tax on the US oil industry in 1980, ultimately generating some $80 billion in gross revenues over the next eight years, according to the Congressional Research Service. But that extra revenue may have come at the expense of domestic oil development. US crude production declined as much as 8% over the same time period, even as the US became more dependent on foreign imports, CRS analysts said.

Although Washington’s interest in a windfall-profits tax may ebb after the elections next week, Biden’s warning that oil companies could “face other restrictions” could telegraph an administration move to curtail exports of diesel.

Administration officials have beseeched refiners to voluntarily curb exports and max out deliveries of gasoline and diesel to the Northeast US to help rebuild dwindling inventories before winter.

Unlike a tax on profits that must be passed by Congress, export controls can be imposed administratively.

“We would be inclined to interpret the reference to ‘other restrictions’ as a further nod to possible limits on refined products exports,” ClearView Energy Partners said in a research note to clients. Amid low product inventories, export limits could remain a risk even after the elections, ClearView said.

--With assistance from Josh Wingrove.