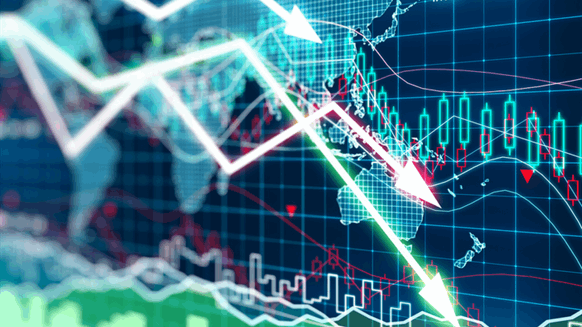 Oil in New York has slumped to its weakest structure on record as the current contract nears expiration.

(Bloomberg) -- Oil in New York has slumped to its weakest structure on record as the current contract nears expiration, adding extra volatility to a market that’s grappling with a glut and evaporating demand.

West Texas Intermediate crude futures on Monday fell to the biggest-ever discount to those for the following month, a structure known as contango that indicates near-term oversupply. It’s amplified by expiry of the current contract on Tuesday, as traders sell soon-to-be outdated futures and buy up those with a longer shelf-life.

The contract expiration is when white-collar financial derivatives trading intersects with the blue-collar world of pipelines and storage tanks.

The tens of billions of dollars traded every day in WTI futures are almost always settled financially, but any contract that hasn’t been closed out after expiry has to be liquidated with a physical delivery of oil if the parties can’t come to some kind of over-the-counter agreement. Those deliveries go to the storage hub of Cushing, Oklahoma, which is connected by pipeline to Canada, the U.S. Midwest, West Texas and the Gulf Coast.

The problem is that Cushing is rapidly filling as fuel consumption collapses due to lockdowns to stem the coronavirus pandemic. Crude stockpiles ballooned by almost 16 million barrels in the three weeks through April 10 to 55 million barrels. The hub had working storage capacity of 76 million as of Sept. 30, according to the Energy Information Administration.

That’s bad news if you’re long May futures, because if you don’t close out your position by the end of trading Tuesday, you have just a few days to let the seller know how you’re going to accept delivery, which is due from May 1-31. At the rate Cushing is filling, finding space is going to be difficult, especially for financial traders who rarely deal with the physical world.

That’s one of the reasons why May contracts is trading at such a discount to those for June. The wide gap is also being driven by the large flows of exchange-traded funds into the June contract. The U.S. Oil Fund accounted for about 25% of outstanding June crude as of last week.

To contact the reporters on this story:
Dan Murtaugh in Singapore at dmurtaugh@bloomberg.net;
Alex Longley in London at alongley@bloomberg.net

To contact the editors responsible for this story:
Ramsey Al-Rikabi at ralrikabi@bloomberg.net
Brian Wingfield, Fred Pals