Why Canada Is The Next Frontier For Shale Oil 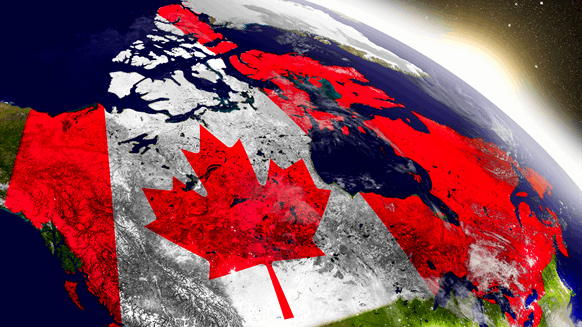 Canada is the first country outside the United States to see large-scale development of shale resources.

Now Canada is looking to its own shale fields to repair the economic damage.

Canadian producers and global oil majors are increasingly exploring the Duvernay and Montney formations, which they say could rival the most prolific U.S. shale fields.

Canada is the first country outside the United States to see large-scale development of shale resources, which already account for 8 percent of total Canadian oil output. China, Russia and Argentina also have ample shale reserves but have yet to overcome the obstacles to full commercial development.

Canada, by contrast, offers many of the same advantages that allowed oil firms to launch the shale revolution in the United States: numerous private energy firms with appetite for risk; deep capital markets; infrastructure to transport oil; low population in regions that contain shale reserves; and plentiful water to pump into shale wells.

"The Montney is thought to have about half the recoverable resources of the whole oil sands region, so it's formidable," Marty Proctor, chief executive of Calgary-based Seven Generations Energy, told Reuters in an interview.

Canada's shale output stands at about 335,000 bpd, according to energy consultants Wood Mackenzie, which forecasts output should grow to 420,000 bpd in a decade. The pace of output growth could quicken and the estimated size of the resources could rise as activity picks up and knowledge of the fields improves, according to the Canadian Association of Petroleum Producers.

Seven Generations and Encana Corp, also based in Calgary, are among leading producers developing the two regions. Global majors including Royal Dutch Shell and ConocoPhillips - who pulled back from the oil sands last year - are also developing Canadian shale assets.

Chevron Corp announced its first ever Canadian shale development in the Duvernay in November. Spokesman Leif Sollid called it one of the most promising shale opportunities in North America. ConocoPhillips sees potential for the Montney to deliver significant production and cash flow to the company, executive vice president of production drilling and projects Al Hirshberg said in November.

Shell will invest more money this year in the Duvernay than any other shale field except the Permian Basin in West Texas, the most productive U.S. shale play, spokesman Cameron Yost said.

"We may learn something in the Permian that becomes applicable in the Montney, and vice versa," Yost said.

The oil sands boom dates back two decades, when improved technology, rising crude prices and fears of global oil shortages sparked a rush to develop the world's third-largest reserves. But in the last five years, much of that investment has migrated south as U.S. shale firms pioneered new drilling techniques and flooded global oil markets with cheaper-to-produce crude.

The oil sands currently account for two-thirds of Canada's 4.2 million barrels per day of crude. They will continue to contribute heavily to Canada's energy output because oil sands projects, once built, produce for decades.

Richard W Goodwin  |  January 30, 2018
Canada's lack of pipe line capacity and reluctance or rail carriers to enter into short-term contracts hinder developing Canada's energy resource e.g. Shale OIl etc. - see Wall Street Journal 1/30/18
Greg Salerno  |  January 30, 2018
"The only thing holding us back is access to market and the cost." Well, that's two things -- and they're both important. Big hurdles.
Tom Williams  |  January 29, 2018
Canada's mineral rights are owned by the government. During the previous Administration, the US saw shale production on Federal Lands (BLM, BIA) decrease while the production rose everywhere else. The exception was New York where the governor was in lock step with our former President. Canada has a similar challenge until they make similar changes in leadership. Best summed up by President Reagan: "Government's view of the economy could be summed up in a few short phrases: If it moves, tax it. If it keeps moving, regulate it. And if it stops moving, subsidize it."
rick roberson  |  January 29, 2018
"Canada is the first country outside the United States to see large-scale development of shale resources,..." Argentina?
RELATED COMPANIES
Company: ConocoPhillips more info
Company: Chevron Corporation more info
Company: Wood Mackenzie more info
Company: EnCana more info
Company: Royal Dutch Shell plc more info