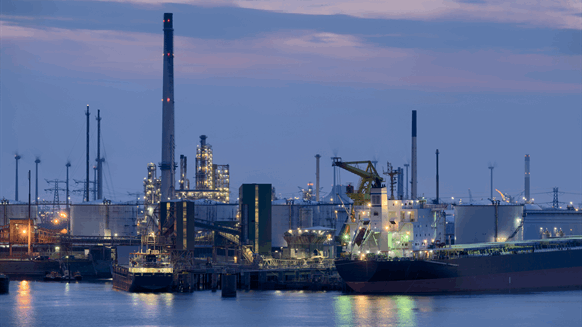 Such an outcome would be a blow to the fast-expanding US LNG industry.

(Bloomberg) -- A grim situation for U.S. natural gas exporters has gotten even worse as the coronavirus outbreak sends global prices plunging on concern that China’s demand for the fuel will collapse.

Suppliers of American liquefied natural gas were already under pressure from depressed prices arising from a global glut and an unusually mild domestic winter. Now, with the virus threatening to disrupt industrial production across China, Asian spot LNG prices have hit a record low.

Faced with prospect of being unable to even cover their shipping costs, customers such as commodity trading houses may simply refuse to load U.S. cargoes. Those cancellations could force LNG export terminal operators to cap, or “shut in,” production of the fuel as their storage tanks fill up.

“Forward prices for summer are now at levels where U.S. LNG shut-ins begin to seem viable,” said Edmund Siau, a Singapore-based analyst with energy consultant FGE. “There is usually a lead time before a cargo can be canceled, and we expect actual supply curtailments to start happening in summer.”

Such an outcome would be a blow to the young and fast-expanding U.S. LNG industry. New export terminals from Maryland to Texas have sprung up to make the country one of the world’s top suppliers, while also providing a crucial outlet for soaring production from shale basins.

China hasn’t directly imported LNG from the U.S. in a year amid trade tensions and tariffs on the fuel. But it’s the world’s fastest-growing buyer, and a slowdown or decline in demand there will have an effect that ripples right across the market. China’s big state-owned LNG importers are said to be considering force majeure declarations on contracted cargo deliveries, which would further burden an oversupplied market.

Brimming global gas stockpiles are increasing the risk that cargoes will be curtailed, according to Nina Fahy, head of North American natural gas for Energy Aspects Ltd., and Madeline Jowdy, senior director of global gas and LNG for S&P Global Platts.

“The full impact of the coronavirus on global gas markets is yet to be felt as lower LNG demand expectations for the Lunar New Year were already built into most forecasts,” Jowdy wrote in an email.“The global LNG outlook is going from bad to worse for suppliers.”

For Cheniere Energy Inc., the biggest U.S. exporter of the fuel, “the summer doesn’t look good” for the economics of American cargoes at the moment, Eric Bensaude, managing director of the company’s marketing arm in London, said in an interview.

Any decisions by Cheniere’s buyers, which include Royal Dutch Shell Plc and Korea Gas Corp., are likely in March or April. That’s a period of seasonally lower demand when the company anticipates “people will be assessing the situation,” Bensaude said.

Customers of U.S. LNG terminals can typically opt out of taking contracted supplies with 30 to 60 days’ notice. Cheniere’s buyers have to pay a fee to cancel a cargo, Bensaude said.

If a customer decides not to load a cargo, Cheniere’s marketing arm won’t take the LNG back and resell it unless market conditions have changed, Bensaude said. Instead, the company would typically reduce LNG production at its terminals, he said.

But U.S. LNG companies continue to sound an upbeat note on the longer-term outlook for the market. Charif Souki, co-founder of terminal developer Tellurian Inc, said the global glut of the fuel could be erased as soon as a year from now. Cheniere’s Bensaude said he also expects the oversupply to ease.

“We are going to weather the storm this year as the market should absorb production from the extra capacity that comes online,” Bensaude said.

To contact the editors responsible for this story:
Reed Landberg at landberg@bloomberg.net;
Simon Casey at scasey4@bloomberg.net
Christine Buurma, Joe Carroll