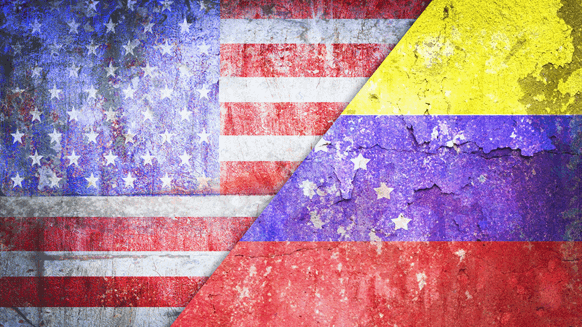 The Trump administration deals its toughest blow yet to the authoritarian Venezuelan leader Nicolas Maduro.

(Bloomberg) -- The Trump administration dealt its toughest blow yet to the authoritarian Venezuelan leader Nicolas Maduro, issuing new sanctions on the nation’s state-owned oil company PDVSA that effectively block his regime from exporting crude to the U.S.

The move ratchets up pressure on Maduro to resign and cede power to National Assembly leader Juan Guaido by cutting off the regime from the market where it gets the bulk of its cash. The U.S. and other countries recognized Guaido last week as Venezuela’s rightful president, and he said Monday he would take control of Venezuelan accounts abroad and appoint new boards to PDVSA and its Houston-based subsidiary Citgo Petroleum.

President Donald Trump assailed Maduro in a letter to Congress explaining an executive order he issued sanctioning PDVSA and Venezuela’s central bank. The action would bolster Guaido, he said, while accusing Maduro’s regime of “human rights violations and abuses in response to anti-Maduro protests, arbitrary arrest and detention of anti‑Maduro protesters, curtailment of press freedom, harassment of political opponents, and continued attempts to undermine” Guaido’s government-in-waiting.

U.S. officials had long been hesitant to apply sanctions on Venezuelan oil because they did not want to exacerbate the humanitarian crisis in the country. But with Maduro and Guaido, a 35-year-old engineer-turned-lawmaker, locked in a struggle for support in the streets and the military, they decided it’s now worth the risk. Guaido so far hasn’t been able to sway the armed forces to his side but he’s tapped deep public discontent with an economy beset by hyperinflation and vast shortages of food and medicine.

In an interview with CNN en Espanol, Guaido said that he had spoken to Trump, but did not provide any details.

National Security Adviser John Bolton told reporters at the White House that Trump’s action would block $7 billion in Venezuelan assets and reduce the country’s exports by $11 billion over the next year, though Maduro is sure to attempt to sell PDVSA’s crude elsewhere. Bolton urged Venezuela’s military to accept a peaceful transfer of power to Guaido.

Mnuchin said that Citgo would be able to continue to operate but won’t be allowed to remit money to the Maduro regime. Its proceeds must instead be held in blocked U.S. accounts. The Treasury secretary added that in the “short term” he expects “modest” impact on U.S. refineries. He noted the sanctions wouldn’t affect oil already purchased that is being shipped, and said he didn’t expect U.S. gas prices to rise.

Maduro decried the asset freeze as a “robbery” on state television Monday evening and instructed PDVSA’s President Manuel Quevedo to take legal actions in U.S. and international courts against the sanctions.

West Texas Intermediate crude futures in New York advanced 0.8 percent to $52.40 a barrel as of 6:01 a.m. in London on Tuesday, after closing down 3.2 percent on Monday.

As of Monday, all PDVSA assets and property subject to U.S. jurisdiction are blocked, according to a Treasury statement, and U.S. citizens and companies are generally prohibited from doing business with the Venezuelan firm. The move is consistent with the Trump administration’s efforts to starve Maduro of oil money, while still blunting the potential impact on U.S. refiners and U.S. motorists, said Jim Lucier, managing director of Washington, D.C.-based Capital Alpha Partners.

The administration is using “a scalpel, rather than a meat ax,” he said in an email.

U.S. Senator Marco Rubio praised the sanctions in a statement released before they were announced.

“The Maduro crime family has used PDVSA to buy and keep the support of many military leaders,” Rubio said. “The oil belongs to the Venezuelan people, and therefore the money PDVSA earns from its export will now be returned to the people through their legitimate constitutional government.”

Jesus Zacarias  |  January 29, 2019
As a Venezuelan I agree with this decision from Trump Administration . This people in power in Venezuela is just stealing as much as they can before they are ousted . The majority of our citizens are suffering a great deal : hunger , humiliation , abuse from the police , National Guard ,army ; there is shortage of all kinds : medicines , gasoline , food - you name it . Anything that the International Community can do to help to put this nightmare to an end is wellcome