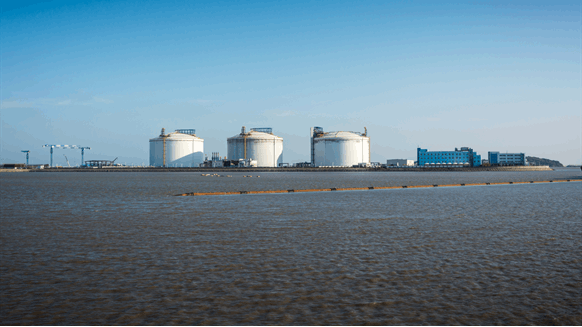 US projects could get requests to cancel a total of 35-45 cargoes for July loading, higher than the number of shipments scrapped for June.

(Bloomberg) -- U.S. liquefied natural gas producers face a wave of order cancellations as global buyers struggle with growing stockpiles of the fuel along with demand weakened by the coronavirus crisis.

All U.S. projects could get requests to cancel a total of 35-45 cargoes for July loading, which is higher than the number of shipments scrapped for June, traders surveyed by Bloomberg News estimated. That means more than half of the average monthly shipments from the fastest-growing LNG producing country could be scrapped in July.

“With U.K. summer demand expected to be lower than average and with limits on storage capacity, it’s clear that there is very little space for any additional supplies,” Hadrien Collineau, a senior analyst at Wood Mackenzie Ltd., said in an emailed note.

At least some cargo cancellations would translate into production curbs that could provide some respite from the global glut that has pushed prices to record lows. Shipments from other global suppliers have been robust despite the warm winter and the health crisis eroding demand as new plants keep pushing supply to the market.

Cheniere Energy Inc., the nation’s biggest producer of LNG, received requests to cancel as many as 30 cargoes due for loading in July from buyers with long-term supply contracts, said people familiar with the situation. Cheniere may also cancel some of its own cargoes, which it typically sells into the spot market, the people said.

For June, buyers told Cheniere that they would not lift at least 10 cargoes.

Requests have been made to cancel shipments from both the Sabine Pass and Corpus Christi plants in the U.S. Buyers from Europe to Asia have also made requests to cancel July loading shipments from other American projects, including from Sempra Energy’s Cameron terminal in Louisiana and Freeport LNG Development LP’s Texas project, according to the people.

Freeport LNG declined to comment. Cameron LNG said in an emailed response to questions that customers have made some modifications to their production and cargo loading plans in response to current market conditions, without providing specifics.

Economics for sending U.S. LNG to markets in Asia and Europe have rapidly deteriorated. The Henry Hub benchmark in the U.S., the main price link for U.S. LNG, is now above prices in European hubs. While Asian spot prices rebounded from record lows, they still don’t make U.S. exports profitable.

Current forward prices indicate that traders will lose more than $0.70 per million British thermal units on LNG export operations from the Gulf Coast to Rotterdam, and more than $0.40 per million Btu for exports to Tokyo in July 2020, Anna Borisova, an analyst at BloombergNEF said in a note.

“Negative profit margins for U.S. LNG exports suggest that cancellations may continue until October 2020,” she said. “Even the buyers that consider both liquefaction and LNG tankers as a sunk cost will make losses if they decide to export the commodity.”

Storage sites in Europe, the closest market for U.S. cargoes, are already fuller than normal, limiting capacity to receive more imports in the latter part of the summer.

There are signs U.S. LNG cargo cancellations may be starting to feed into actual production curbs as natural gas flows to U.S. export plants plummeted to their lowest level in seven months.

Most of Cheniere buyers had to submit requests to cancel July loading shipments by Wednesday. Cheniere declined to comment on commercial discussions with its customers or operations.

“The flexibility inherent in our LNG contracts – destination flexibility and the option to not lift cargoes, but pay the liquefaction fee – helps our customers effectively manage their energy portfolios through market cycles, while still providing Cheniere with reliable cash flow,” the company said in an email.

To contact the editors responsible for this story:
Jeremy Hodges at jhodges17@bloomberg.net
Andrew Reierson, Aaron Clark