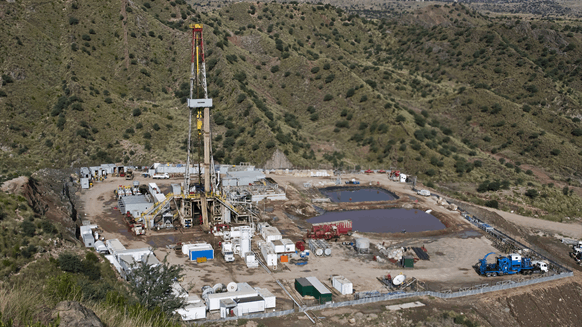 (Bloomberg) -- Britain’s quest to tap domestic supplies of shale gas is looking increasingly bleak as the government’s liaison between the industry and local communities resigned after just six months in the job.

Natascha Engel left the government appointed job telling a newspaper that the U.K.’s policy on hydraulic fracturing technology is being driven by environmental protesters and not scientific evidence. Those efforts resulted in some of the strictest regulations for the industry, which pumps fluid and sand under high pressure to stimulate gas flows from otherwise untappable rock formations.

Fracking is one of the few technologies that could slow or even reverse the sharp declines in oil and gas production from the North Sea as conventional deposits are pumped dry. While Britain prospered in the 1980s and 1990s with wealth tapped by the oil industry, income has shrunk since production peaked. Exploration has been halted a number of times over concern about earthquakes caused by fracking, most of them too small for people to notice.

“U.K. shale explorers have spent hundreds of millions of pounds proving that we have enough gas beneath our feet to supply homes across the country for the next 50 years,” said Francis Egan, chief executive officer of Cuadrilla Resources Ltd., which is fracking in northern England. “Instead of embracing this huge opportunity, we remain wedded to a minuscule micro-seismic threshold which has no scientific basis and is without parallel anywhere else in the world.”

After years of delays, fracking in the U.K. seemed closer than ever when Cuadrilla Resources Ltd. said in February that the nation’s first horizontal fracking well had uncovered a large reservoir of high-quality fuel.

But that optimism however was short-lived as Cuadrilla blamed overzealous controls on seismic activity that prevent it from being able to fully tap the potential of the well. Both it and Ineos Group Ltd. have said that unless the government loosens regulations they won’t be able to frack in the U.K.

Those limits as well as a swift drop in the price of gas is making it harder to justify new drilling. Liquefied natural gas imports have flooded into the U.K. this spring, sending the price of the fuel to its lowest since 2016. The benchmark front-month contract in Britain is now less than half of where it was in September and is below the average price over the past two decades.

This isn’t the first time fracking has been stopped in its tracks. In 2011 after fracking by Cuadrilla caused minor earthquakes at its northwest England site leading to an effective ban on all drilling while the government probed the industry. Eventually, the government allowed work to continue with stricter limits on how much the Earth can shake nearby during the fracking process.

Testing last year was delayed by “seismic events,” which forced Cuadrilla to halt operations. The rules limit any vibrations that exceed 0.5 on the Richter scale. The British Geological Survey has measured dozens of naturally-caused earthquakes so far this year, at least seven of which registered more than 2 on the scale. None caused significant damage. Readings under 3 often are only detected by seismographs.

While the earthquake risk from fracking remains small, concern about use of fossil fuels is rising within the environmental community. Earlier this month, key intersections in London were effectively blocked by protesters from Extinction Rebellion, which is calling for, among other things, the U.K. to become carbon neutral by 2025.

Anti-frackers including Greenpeace say that drilling will irreparably harm the environment and will keep the country wedded to fossil fuels at a time when cleaner alternatives are getting cheaper.

“The government couldn’t have done more to try to get fracking going,” said Tony Bosworth, a Friends of the Earth campaigner. “Now the sector is at a complete impasse and their last stand is to lobby with all they’ve got to weaken earthquake regulations. The game is surely up and fracking is not viable.”

Ineos, which also holds licenses to frack in the U.K., says it’s attempting to encourage renewables but that it needs gas to feed its chemical plants.

“People still need to heat their homes and cook their food,” Ineos said in an emailed statement. “Gas is the cleanest fossil fuel, and U.K. gas has a lower carbon footprint compared to imports. For Greenpeace to suggest otherwise is simply misleading in the extreme.”

Rob Hannah.  |  May 03, 2019
Nowhere, have I seen any research to indicate what proportion of released, fracked gas, methane, makes its way to the surface and is released into the atmosphere away from the well head, as this leakage contributes to global warming. Burning gas itself contributes to global warming. The future, at the moment anyway, is electricity generated from renewable sources, so get on with developing it, UK government of the day ...