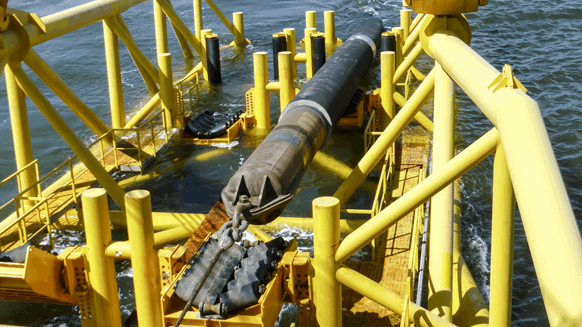 Blocking the Nord Stream 2 link under the Baltic Sea would be a blow to Russia, keeping it dependent on Ukraine as a gas export corridor.

(Bloomberg) -- President Donald Trump’s threat to sanction Russia’s controversial new natural gas pipeline into Europe is an indication that competition to supply the fuel is heating up.

Blocking the Nord Stream 2 link under the Baltic Sea would be a blow to Russia, keeping it dependent on Ukraine as a gas export corridor at a time those two nations are locked in a dispute over the fuel transit. Trump also is seeking to carve out market share for liquefied natural gas shipments from the U.S. Gulf Coast, which is growing rapidly after making its first overseas deliveries in 2016.

The winners so far are European energy consumers, who are enjoying some of the lowest gas prices in three years. While Trump and officials in his administration have spent months threatening sanctions without delivering any specifics, keeping that risk in the public eye is likely to complicate efforts by Russia’s gas pipeline company Gazprom PJSC to complete the link on schedule by the end of this year.

“Although Gazprom has said that U.S. sanctions would not impact its ability to finance the project, the company will face challenges in tapping global debt markets,” said Leslie Palti-Guzman, president of the GasVista LLC energy consultant in New York.

Trump framed the issue as one for Germany, adding to tensions that span a number of issues ranging from trade to security and immigration. The U.S. is concerned that Chancellor Angela Merkel’s government isn’t putting enough money into defense of the region against threats including Russia and that Nord Stream 2 will ensure funds go to Vladimir Putin’s government in Moscow.

“I say, ‘How can you do that?”” Trump said at the White House in Washington on Wednesday night. “We’re protecting Germany from Russia. And Russia is getting billions and billions of dollars of money from Germany.”

Trump’s suggestion is that Germany should buy American gas.

“We have tremendous LNG, liquefied natural gas, and a lot of the European countries are wanting it,” Trump said. “Germany made a decision to buy a tremendous percentage of their energy from Russia. And Germany, whether they should be doing that or not, they’re the ones that have the power to block it. They shouldn’t buy it.”

The fate of Nord Stream 2 may also be linked to the other disputes roiling Trump’s relationship with Merkel, especially his concern about a trade deficit with Germany coming from car shipments from companies like BMW AG to Volkswagen AG.

“If Trump links tariffs on German cars with the gas pipeline, Merkel might blink,” said Laurent Segalen, a partner at Megawatt-X in London, who advises on financing wind and solar projects and is a former commodities banker. “She is non confrontational. She might kick the can down the road and hand the problem to her successor hoping there will be someone else in the White House.”