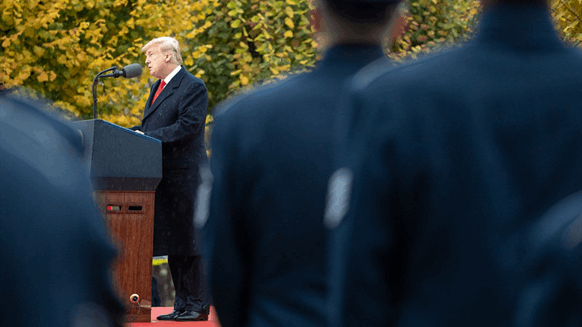 Crude Oil prices going up as Saudi Arabia cuts production levels. Our great Energy Companies, with millions of JOBS, are starting to look very good again. At the same time, gasoline prices at record lows (like a big Tax Cut). The BEST of all Worlds. “Transition To Greatness”

The White House has looked to bolster energy companies during the crisis, which saw energy prices plummet amid collapsed demand from the coronavirus outbreak and a price war between Russia and Saudi Arabia.

Treasury Secretary Steven Mnuchin and Energy Secretary Dan Brouillette have been considering options to help ensure capital keeps flowing to U.S. oil producers. And the Federal Reserve made changes to its broad Main Street lending program last week -- including some modifications sought by oil industry advocates -- though few producers are likely to benefit as lenders back off from the sector.

Trump has also said he wants to add as much as 75 million barrels of oil to the nation’s Strategic Petroleum Reserve, taking advantage of record low prices for crude, and that he’ll consider blocking imports of crude from Saudi Arabia.

In early April, Trump helped broker a deal in which major producers -- including Saudi Arabia, Russia, Mexico, Canada, Brazil and the U.S. -- coordinate output cuts to address a supply glut.

To contact the reporter on this story:
Justin Sink in Washington at jsink1@bloomberg.net

To contact the editors responsible for this story:
Alex Wayne at awayne3@bloomberg.net
Justin Blum