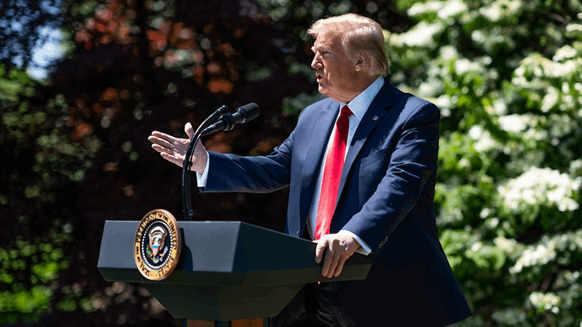 Top cabinet officials have been huddling over a plan to deliver on the president's tweeted promise.

(Bloomberg) -- A plan being weighed by Treasury Secretary Steven Mnuchin to steer financial aid to beleaguered oil drillers could set up a clash with Democrats who have warned against any bailout for the industry.

Mnuchin said he is considering a lending program for the companies that are seeking aid as they cope with a devastating plunge in prices.

“One of the components we’re looking at is providing a lending facility for the industry,” Mnuchin told Bloomberg News on Thursday. “We’re looking at a lot of different options and we have not made any conclusions.”

Industry allies have promoted several ideas, such as loans to distressed producers in exchange for government stakes or lifting restrictions on existing aid programs, which could complicate negotiations on future stimulus packages.

President Donald Trump pledged to make funds available to oil companies on Tuesday, and top cabinet officials have been huddling over a plan to deliver on the president’s tweeted promise to ensure “these very important companies and jobs will be secured long into the future.”

The effort comes as analysts predict a wave of bankruptcies among oil producers struggling to survive an unprecedented collapse in crude prices and demand tied to coronavirus-spurred lockdowns that have grounded planes and kept cars off the road.

Mnuchin wouldn’t say whether the program would be housed at the Treasury Department or at the Federal Reserve, which has created loan facilities to help businesses hard hit by the economic collapse triggered by the outbreak.

But congressional Republicans have warned that the lending created by the $2 trillion stimulus package isn’t enough to head off the “growing emergency.”

“We face a real and present danger of seeing hundreds -- if not thousands -- of oil producers shuttering,” 11 Republican senators warned in a letter this week to Mnuchin and Federal Reserve Chairman Jerome Powell. “Assisting these companies could be the difference between maintaining our domestic energy production and workforce or shedding more U.S. jobs and returning to dependence on foreign sources of oil.”

Industry advocates are pushing for changes to ensure oil companies can tap loans restricted to firms that had credit ratings of at least BBB-/Baa3 as of March 22, 2020. Some oil companies saw their debt downgraded even before that deadline as they were pummeled by both the pandemic-spurred collapse in fuel demand and a surge in crude unleashed by a Russia-Saudi Arabia battle for market share.

That March 22 ratings deadline could be a big obstacle for shale producer Occidental Petroleum Corp., which had its debt cut to junk by Moody’s on March 18, with Fitch and S&P following on March 20 and March 25, respectively.

Republicans led by Senators Kevin Cramer of North Dakota and Ted Cruz of Texas argue the Treasury Department and Fed should shift the date earlier so company ratings predate the Russia-Saudi maneuvering. They are also asking for additional flexibility on credit score requirements.

Separately, the Independent Petroleum Association of America wants the Fed to permit oil companies to use loans under the Main Street program to pay off existing debt coming due amid the crisis. In a letter to Powell, IPAA president Barry Russell said that change would provide a “bridge to recovery for businesses that would have otherwise been able to meet their debt obligations, were it not for the virus.”

Old Prophet  |  May 03, 2020
Many shale companies require prices propped up by dictators and despots to survive. We were better off when the Texas railroad commission metered the supply to avoid gluts. Try removing all those pesky control devices from your car engine and let the market regulate it for you!!
Thomas Lord  |  April 27, 2020
I have a real problem with using taxpayer money to pay off loans for companies that bathed in debt with no hope of recovery. I am on board only if the leadership of these firms take personal liability (i.e., they personally sign the loans and are subject to personal bankruptcy if the loans are not repaid) for federal monies that are not used for staff payroll payments.
Gasrat  |  April 24, 2020
The left will do anything to destroy Trump and the industry that powers the world.