Trump May Waive US Ship Mandate for Natural Gas 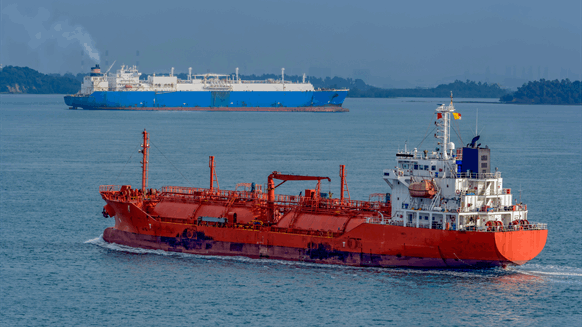 For now only US-flagged vessels can move natural gas from American ports to Puerto Rico or the Northeast.

(Bloomberg) -- President Donald Trump is seriously considering waiving the requirement that only U.S.-flagged vessels can move natural gas from American ports to Puerto Rico or the Northeast, according to people familiar with the deliberations.

The issue was debated during an Oval Office meeting on Monday, following requests from Puerto Rico and pressure from oil industry leaders to ease the nearly 100-year-old Jones Act requirements, according to three people. Although top administration officials are divided on the issue, Trump is now leaning in favor of some kind of waiver, said two of the people, who asked for anonymity to discuss the private deliberations.

The move -- which would be fought by U.S shipbuilding interests and their allies on Capitol Hill -- has been promoted as essential to lower the cost of energy in Puerto Rico and ease the flow of American natural gas to the U.S. Northeast, where there aren’t enough pipelines to deliver the product from Pennsylvania.

But even inside the Trump administration, there are fierce defenders of the Jones Act, a 1920 law requiring that vessels moving cargo between two U.S. ports be U.S.-built, -owned and -crewed. The law was originally designed to protect the domestic shipping industry and the country’s maritime might, and supporters argue that it’s just as essential today to ensure ships are made in the U.S. Any move to weaken or waive the requirements threatens the U.S. shipbuilding industry and the jobs tied to it, they argue.

Even as the White House weighs waivers, a handful of Trump administration officials have pushed to expand the Jones Act’s reach, two of the people said. They are aiming to effectively revive a Customs and Border Protection bid to revoke rulings allowing foreign vessels to transport some equipment to offshore oil rigs. The agency withdrew the formal proposal in 2017, after the oil industry warned it could cripple production in the Gulf of Mexico.

The White House press office did not respond to a request for comment.

Trump faces increasing pressure to relax the shipping requirements. Puerto Rico is seeking a 10-year waiver to allow liquefied natural gas to be delivered to the island on foreign-flagged vessels.

And energy industry leaders have pressed for changes to facilitate natural gas and petroleum product shipments between U.S. states. Among them: billionaire oil man Harold Hamm, the chairman of Continental Resources Inc. and a former Trump energy adviser. In January, Hamm complained at a Houston energy conference that the U.S. has been forced to buy LNG from Russia because there are no Jones Act-compliant tankers to transport liquefied natural gas.

Kristin Thomas, a Continental Resources spokeswoman, said the U.S. Domestic Energy Producers Alliance, which Hamm co-founded, “is in favor of being able to ship U.S. LNG to U.S. ports,” although the group “has not waded into any issues related to Puerto Rico.”

“The Jones Act is completely contrary to the president’s energy agenda, in large measure because it encourages the importation of energy -- diesel from Europe, LNG from Russia -- rather than the use of energy made in America and developed and refined by American workers,” said Mike McKenna, a Republican energy strategist. “If you’re in favor of the Jones Act, you’re in favor of damaging consumers and helping very specific interests line their pockets at consumers’ expense.”

Although no large LNG carriers comply with Jones Act requirements today, federal law already makes an exception for foreign tankers built before 1996 to transport LNG to the island, as long as they are brought under the U.S. flag.

Rudolf Huber  |  April 26, 2019
The last LNG vessels built in the US would be 50 years old if they still existed at all. LNG ship building has moved to China and it will take a decade to rebuild the expertise in the US. That's not impossible but in the meantime, its smart to allow US LNG being used in parts of the country that need it. Trump is right on this.