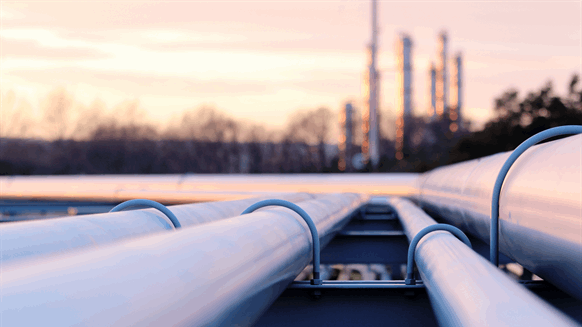 The Trump administration is considering taking steps to limit the ability of states to block interstate gas pipelines and other energy projects, according to sources.

(Bloomberg) -- The Trump administration is considering taking steps to limit the ability of states to block interstate gas pipelines and other energy projects, according to three people familiar with the deliberations.

The effort, possibly done through an executive order, is aimed chiefly at states in the Northeast U.S., where opposition to pipeline projects has helped prevent abundant shale gas in Pennsylvania and Ohio from reaching consumers in New York and other cities.

New York used a Clean Water Act provision to effectively block the construction of a natural gas pipeline being developed by Williams Partners LP to carry Marcellus shale gas 124 miles (200 km) to New England. The project got the green light from the Federal Energy Regulatory Commission but ran into obstacles in New York, where regulators denied a water quality permit.

While mostly targeted toward boosting limited pipeline capacity in the Northeast, the initiative could help drive permitting and construction of other energy projects, including coal export terminals. For instance, Lighthouse Resources’ proposed coal export terminal in Longview, Washington, was ensnared when the state’s Department of Ecology denied a critical Clean Water Act permit, citing concerns about air quality and increased railroad traffic to serve the site.

The new initiative dovetails with expectations that President Donald Trump would use his State of the Union address to tout efforts to accelerate permitting and construction of oil and gas pipelines, though he’s postponed the speech and the exact timing of any announcement remains unclear.

The potential White House action was earlier reported by Politico.Pipeline advocates who say states are abusing their authority under the Clean Water Act have advanced ideas for reining it in.

“It just never made sense to me that a state could be able to use the Clean Water Act and effectively veto a federally approved project,” Dena Wiggins, president of the Natural Gas Supply Association, said during an event on Thursday. “There’s got to be something to done to address that issue.”

But it’s not clear how much -- if at all -- an executive order could curtail states’ special powers under the statute. Industry officials said real change may require legislation to alter the statute itself, such as a bill advanced in 2018 by Senator John Barrasso, a Wyoming Republican.

The issue, pipeline advocates say, is especially pronounced in the Northeast, where there isn’t enough capacity to send gas to New York City and other metropolitan areas in times of heavy demand. Energy Secretary Rick Perry has invoked the idea of using national security grounds to justify action on the issue.

“If a polar vortex comes into the Northeast part of the country, or a cyberattack, and people literally have to start making decisions on how to keep their family warm or keep the lights on, at that time, the leadership of that state will have a real reckoning. I wouldn’t want to be the governor of that state facing that situation,” Perry said last summer at the World Gas Conference in Washington. “We have to have a conversation as a country. Is that a national security issue that outweighs the political concerns in Albany, N.Y.?”

Cara Meyers  |  January 29, 2019
I imagine we will have similar problems in Colorado as the new governor and state legislature have a majority that is opposed to the oil and gas industry as a whole. It will be very difficult to convince people here until our electricity is sky high ( which it already costs about 7% more) because of taxation on the bill to promote clean air , clean jobs as well as executive orders to only promote "renewables". Can't anyone educate politicians on the true science of hydrocarbon energy? Sigh..
Deano  |  January 28, 2019
The pipeline infrastructure needs to to improved and expanded. Denying permits without actually considering the facts is wrong and needs to be addressed. Causing suffering to citizens due to lack of heat is wrong and short sighted. The pipeline companies need to improve their construction quality. When environmental disasters occur frequently during construction, that is a real problem and a public perception nightmare.
RELATED COMPANIES
Company: TransCanada Corporation more info