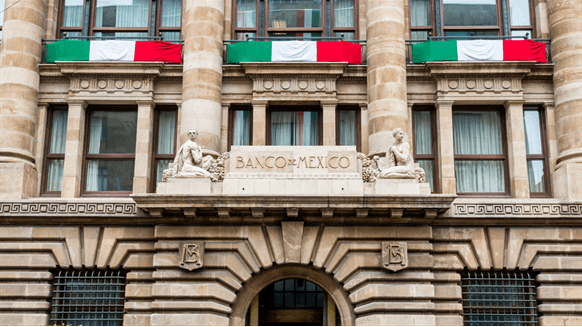 (Bloomberg) -- Mexico’s oil hedge is the largest annual oil deal in Wall Street, but this year the finance ministry has kept the $1 billion operation strictly under wraps -- even declaring its details a state secret. Time is running out to do the deal for 2021, though, and the market is abuzz with rumors.

Every year, the Latin American nation locks in the price of its oil exports by buying put options from Wall Street banks. The deal typically roils the market, creating violent swings in the price of oil options.

If the deal is happening, Mexico and its bankers have so far avoided leaving their typical calling card in the market: there hasn’t been the usual spike in options volatility.

Still, many traders and brokers -- some of them with experience formerly working for banks involved on the hedge -- suspect the deal is ongoing and attribute recent price drops to Mexico’s activity.

Oil traders and brokers have pointed to some potential signs of activity. For example, one brokerage recently quoted on the over-the-counter derivatives market a deal for Maya crude, the Mexican flagship crude blend, for calendar 2021.

Other signals include a flurry of short-dated put options in recent days combined with stronger demand for out-of-the-money 2021 calls, which could indicate the dealers on the Mexican hedge are opting for a novel way to re-insure themselves. In the past, the banks and big oil companies behind the deal have included Goldman Sachs Group Inc., Citigroup Inc., JPMorgan & Chase Co. and Morgan Stanley, plus the in-house trading units of Royal Dutch Shell Plc and BP Plc.

By Thursday afternoon, however, traders and brokers started to see some more conventional signs that Mexico was on the market. A large strip of 2021 Asian style put options around $40 a barrel, an instrument Mexico traditionally uses to hedge, was traded.

Mexico has taken unprecedented steps this year to prevent any leak. First, it declared the whole hedge a state secret. Then, it reduced the number of officials at the central bank that know the details of the deal, according to people familiar with the matter. And Mexican officials, who in previous years announced crucial details in the middle of the operation, have kept quiet.

“The hedge market for the Mexican mix is very thin,” Mexican Finance Minister Arturo Herrera said last month. “For that reason we don’t say when we start nor when we stop.” His deputy, Gabriel Yorio, wouldn’t confirm or deny in a recent interview whether Mexico would hedge the price of oil for 2021.

Although Mexico first hedged in the early 1990s, the country didn’t introduce the current annual program until a decade later. Since then, it has hedged every year, with the exception of 2003 and 2004, when it skipped the deal as oil prices were rising. Some traders have speculated that Mexico could opt to skip the 2021 hedge, arguing that oil prices are likely to rise next year as the world emerges from the impact of the coronavirus pandemic.

The final choice will become clear in a few weeks. The hedge runs from December 1 to November 30, so Mexico needs to complete it in the next eight weeks. Traditionally, Mexico has told lawmakers at the end of the year that it had completed the operation.

Mexico has reason to be secretive. The deal, which in the past has secured a minimum price for about 250 million to 300 million barrels of oil, costs the government about $1 billion. Any leak can increase the final cost, according to the country’s central bank, which runs the program on behalf of the Ministry of Finance.

“Several institutions outside the hedge could use the information to speculate, buying the same financial instruments ahead of the government, increasing considerably their price,” the central bank said in a letter dated 2018 explaining its reasoning to keep the data about the hedge secret.

The central bank went on to say it had already experienced the issue, suggesting hedge funds and others had managed to trade ahead of the deal.

“After a series of articles about the Mexican oil hedge in August 2015 by Bloomberg News, the volatility in West Texas Intermediate and Brent increased, generating also an increase in the price offered by the counterparts to the Banco de Mexico to cover its operations,” it said.

Beyond the increase in costs for Mexico, oil traders pay attention to the hedge because it can roil markets. As the banks on the other side of the deal sell the insurance to Mexico -- Asian style put options -- they have to re-insure themselves. In doing so, they can send Brent and WTI prices down.

Lots of money is a stake. On top of the $1 billion the Mexican government pays Wall Street for the insurance, the notional cost of the hedge has been more than $20 billion at times. And if prices plunge, Mexico gets a big check from its bankers.

The hedge has paid several times since its inception during the Gulf War in 1990-91. It yielded multibillion-dollar payouts in 2009 -- after the global financial crisis sent oil prices sharply lower -- and again in 2015, when a record of more than $6 billion was paid, as well as in 2016. Mexico is expecting a big payout this year too, after oil prices crashed due to the coronavirus pandemic and the price war between Russia and Saudi Arabia earlier this year.

--With assistance from Nacha Cattan, Amy Stillman and Michael Roschnotti.