Thunberg Urges NO and CA to Wind Down Production 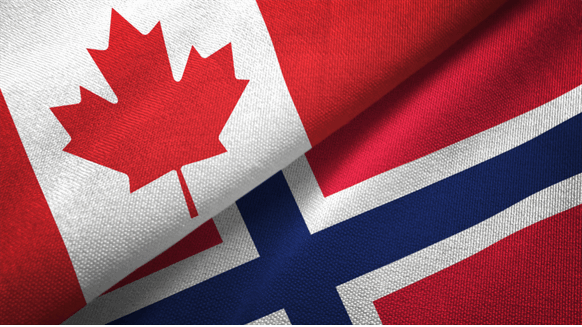 Greta Thunberg and 15 other youth climate activists urged Norway and Canada to wind down their oil and gas production, which they said violates children's rights around the world.

(Bloomberg) -- Greta Thunberg and 15 other youth climate activists urged Norway and Canada to wind down their oil and gas production, which they said violates children’s rights around the world.

In letters to the prime ministers of both countries, the campaigners contrasted their self-professed roles as international leaders in the fight against climate change against their planned increase in fossil-fuel production, according to a statement from law firm Hausfeld LLP, which represents the petitioners. Higher output breaches commitments under the United Nations Convention on the Rights of the Child, the activists said.

It’s not the first time Thunberg, 16, has gone up against Norway, which neighbors her native Sweden. In October, she criticized the Scandinavian countries’ emissions record, and cited Norway’s oil policies as one of the reasons for rejecting the Nordic Council Environment Prize.

“Norway must honor its responsibilities to children everywhere,” Thunberg and the 15 other activists said in the letter to Norwegian Prime Minister Erna Solberg. “It must demonstrate how a major fossil fuels producer and exporter can transition away from these pollutants, blazing a trail for other fossil fuel-reliant economies to follow.”

The same 16 petitioners, including children from Nigeria, the U.S. and the Marshall Islands, filed a legal complaint with the UN in September against France, Germany, Brazil, Argentina, and Turkey for not doing enough to tackle climate change. Their latest missives coincide with the UN’s COP25 meeting in Madrid, where Thunberg arrived last week after sailing back across the Atlantic following her trip to the UN Climate Climate Action Summit in New York in September.

Norway is western Europe’s biggest oil and gas producer. After three years of decline, its crude production is set to surge next year following the start of the giant Johan Sverdrup field in the North Sea. Output will then drop again from the middle of the next decade.

Canada, which has the world’s third-biggest proven oil reserves, pumped more than OPEC’s second-biggest contributor Iraq in 2018, according to BP Plc data. The North American nation’s energy regulator expects crude output to grow by almost 50% by 2040.

Rudolf Huber  |  December 11, 2019
I am sure OPEC+ and US shale producers would love that very much. More market demand for them to deliver into. Does Greta ever think through what she says before she says it? Sorry, do their handlers ever think those things through?
Chet  |  December 11, 2019
I can see Norway falling all over themselves to stop all "fossil fuel" production because some 16 year old mouthpiece tells them to. After all they banned any combustion engine driven vessel to travel in their fiords. But Canada? I have more faith in the normal Canadian to be reasonable about these calls for oil and gas shutins.
Mark Steiner  |  December 10, 2019
Apparently no one ever told Ms. Thunberg that it is energy fluctuations from the Sun, not so-called greenhouse gases, that drive climate change worldwide; secondarily geothermal sources on Earth.
Dale Birnie-Browne  |  December 10, 2019
While I appreciate Miss Thunberg‘a dedication to her cause, she hasn’t lived on this world long enough to have the life experience and knowledge to make such assumptions about climate change. It baffles me how certain adult world leaders are so acceptable at being duped by this 16 year old child who should be attending school and getting a proper education. She is not a climatologist but used as a pawn by environmentalists with an agenda!
John David LaRue  |  December 10, 2019
Comical. If really concerned about global pollution you have to start in China and India. One dollar spent in either will take more pollution out of the atmosphere than anywhere else in the world.