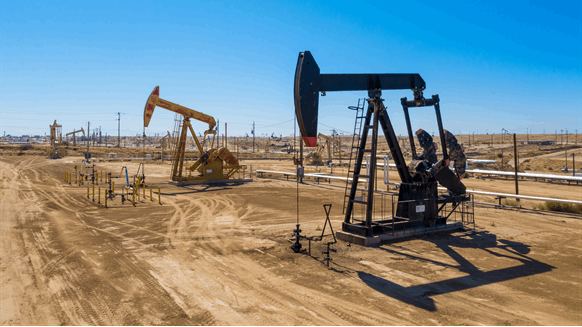 On first review, the staff believes it's legally possible to mandate pro-rationing.

(Bloomberg) -- Texas’ main oil regulator is weighing for the first time in nearly half a century whether the state should curb crude production, a move that would have an enormous economic and political impact.

The idea, still in preliminary discussions among the staff at the Texas Railroad Commission -- which despite its name regulates the oil industry -- comes after prices plunged to levels last seen 18 years ago. It shows that a policy once considered unthinkable is now being mulled as companies slash spending.

As a first step, the staff is reviewing how implementing the reduction of output via what’s known as pro-rationing would look like in practice, according to people who have discussed the issue. On first review, the staff believes it’s legally possible to mandate pro-rationing, one of the people said.

Ryan Sitton, one of three commissioners at the regulator, wrote in a Bloomberg Opinion piece Friday that the federal government could coordinate output cuts with Saudi Arabia and Russia to calm the market. Such an approach could stabilize prices in the mid-$30s, Sitton wrote, which would “stave off a total oil industry meltdown.”

“In theory, Texas could cut production by 10%, and if Saudi Arabia is willing to cut production by 10% from its pre-pandemic levels and Russia is willing to do the same, it would return the market to pre-crisis levels (and only somewhat oversupplied),” he wrote. “With other governments manipulating oil markets, it’s fair to ask: Why shouldn’t our government step in?”

Oil has lost almost half its value in the two weeks since the producer alliance led by Saudi Arabia and Russia unraveled. West Texas Intermediate crude, the U.S. benchmark, rallied by the most on record Thursday after U.S. President Donald Trump said he may intervene in the spat. Futures extended gains on Friday by as much as 9% to $27.49 a barrel.

The oil price war between Saudi Arabia and Russia has dragged the U.S. into the conflict. Thanks to the American shale revolution, the U.S. is now the world’s largest oil producer, and the economies of states like Texas, New Mexico and North Dakota suffer when petroleum prices drop.

“We have a lot of power over the situation, and we’re trying to find some kind of a medium ground,” Trump said, adding that he would wade into the dispute at an unspecified “appropriate time.”

With WTI and Brent crude plunging earlier this week to levels last seen in 2002, Trump said both Riyadh and Moscow were losing.

The Permian basin, the most prolific shale region in the U.S., straddles West Texas and southeast New Mexico. Texas is the largest state in the U.S. by production, pumping more than 40% of the country’s crude oil.

The state agency began looking at pro-rationing after multiple independent shale producers reached out to see what a state response would look like, according to separate people familiar with the situation. No policy has been formally drafted, and a response from the commission isn’t guaranteed, the people said. The Wall Street Journal first reported that the commission was considering curtailments.

Historically, the commission allowed producers to pump to a percentage of the so-called maximum efficient rate of each well. The commission last imposed limits on Texas oil production in March 1972, when it allowed all wells in the state to flow at 100% of their rate for the first time since soon after the end of the Second World War.

Despite the rise in oil prices on the back of hopes of a deal between Saudi Arabia, Russia and perhaps Texas, oil analysts remained sceptical.

--With assistance from Ramsey Al-Rikabi.

Rudolf Huber  |  March 24, 2020
Hot talk while everyone waits for a miracle to save the day without anyone having to move a finger. Mandatory output cuts would cause a massive wave of lawsuits. Just imagine you are struggling and now the state tells you how to run your business. Great opportunity to blame them for your problems. And I don't see so many small producers sign up to a deal all at the same time. Besides, if they did there would be action by lenders and shareholders. Not going to happen.