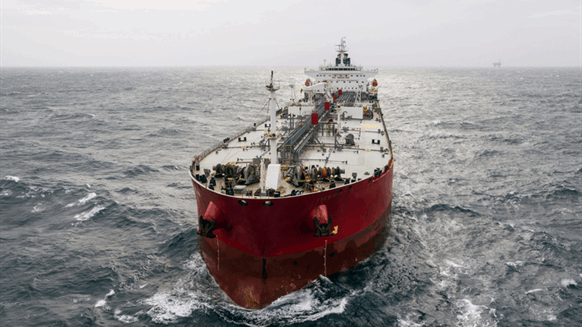 A supertanker filling up with crude in the Gulf of Mexico is routine these days. Less so is a supertanker loading American oil without coming within 1,000 miles of the Texas or Louisiana coast.

(Bloomberg) -- A supertanker filling up with crude in the Gulf of Mexico is routine these days. Less so is a supertanker loading American oil without coming within a thousand miles of the Texas or Louisiana coast.

The Alsace is steaming for China laden with about 2 million barrels of West Texas Intermediate crude after spending three weeks in the Caribbean, according to ship-tracking data and a document seen by Bloomberg. It received its cargo via two ship-to-ship transfers and one terminal visit in the U.S. Virgin Islands.

For reasons that aren’t entirely clear, the Alsace didn’t go to the U.S. coast to get the oil. Instead, two ships -- the Almi Galaxy and Ionic Aspis -- traveled some 2,000 miles from Beaumont, Texas, and arrived in late March at Limetree Bay oil terminal at St. Croix. The Almi Galaxy offloaded its contents via ship-to-ship transfer to the Alsace. The Ionic Aspis, which had arrived earlier, offloaded its cargo into a tank at the terminal where the supertanker later picked it up, according to a person familiar with the matter who asked not to be identified because the purchases aren’t public.

After loading at St. Croix, Alsace set course for Aruba. Off its coast, the supertanker received more oil from the Serenea, which had also loaded in Beaumont, according to the person familiar and ship-tracking data.

Alsace was chartered by Unipec, the trading arm of China’s largest refiner China Petroleum and Chemical Corp., known as Sinopec, the person said. Unipec has been using tanks leased by Sinopec at Limetree Bay’s oil terminal at St. Croix. But the Asian trader has previously loaded VLCCs in the Gulf of Mexico to send American oil overseas.

Alsace is now signaling that it’s heading to China, expected to reach Zhoushan around May 19.

Chuck Riviere  |  April 22, 2019
Living on St. Croix large tanker visits seem more frequent than ever, particularly eversince Limetree has reopened storage logistics facilities at the old Hovensa/Hess terminal. These tankers don't hang around more more than a couple of days and then steam East pronto.
Sean Muller, PG  |  April 22, 2019
I think it’s great even though the Chinese a trying to avoid any tariffs. Give them all they want. What we needed is a large bulk terminal in Seattle with a direct pipeline from the Williston Basin. Get permitting the ROR today unless such already exists.
Joe Taylor  |  April 20, 2019
That is odd. Guaranty the NSA is watching this. This makes sense to someone, just not us.