Some American Oil Selling at Under $10 a Barrel 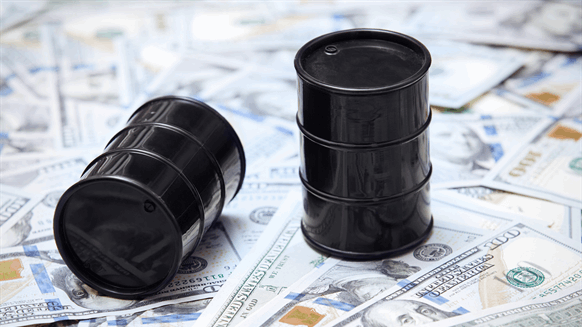 The whole market is groaning under the weight of this oil surplus.

(Bloomberg) -- Oil is selling for less than $10 across key North American hubs as the global demand shock from coronavirus leaves crude with nowhere to go.

The coronavirus pandemic has hit demand so hard that as benchmark futures plunge to lowest in 18 years, oil is backing up throughout the distribution system, raising the prospect that producers will need to shut in wells. Some of the hardest-hit areas have been those thousands of miles from export terminals, which would provide the possibility of escape, either to foreign markets or onto tankers as floating storage.

Refiners across the U.S., including PBF Energy Inc., Valero Energy Corp. and Phillips 66, are slowing fuel production as restrictions on travel and work has reduced gasoline and jet fuel demand to a trickle. North Atlantic Refining Ltd will be idling its 130,000-barrel-a-day refinery in Newfoundland, Canada, for two to five months due to the outbreak.

The market is groaning under the weight of this oversupply so much so that U.S. midstream operators such as Plains All American Pipelines have asked their suppliers to reduce oil production because storage capacity is reaching its limits.

Bakken crude in Guernsey, Wyoming, sank to a record-low $3.18 a barrel Monday, according to data compiled by Bloomberg, while Western Canadian Select in Hardisty, Alberta, was worth just $4.18. Even oil in West Texas is as cheap as it’s ever been. West Texas Intermediate in Midland was $10.68, just above its all-time low from 1998. And it’s lower-quality counterpart, West Texas Sour, slid to a record $7.18, the lowest in data going back to 1988.

West Texas Intermediate Light, also known as WTL, traded at around $7.50 a barrel below the WTI Midland benchmark on Monday, traders said, the equivalent of about $3 a barrel outright. Including transportation costs from the wellhead, that would mean the very light crude is worth near-zero, if not negative, when it comes out of the ground.

Even oil that makes it to a dock isn’t immune from the price plunge, as refineries around the world slow down. U.S. oil for export from Corpus Christi -- the end point of several new Permian pipelines and a major exporting hub -- traded at $15 a barrel below July Brent, according to traders.

--With assistance from Catherine Ngai and Javier Blas.