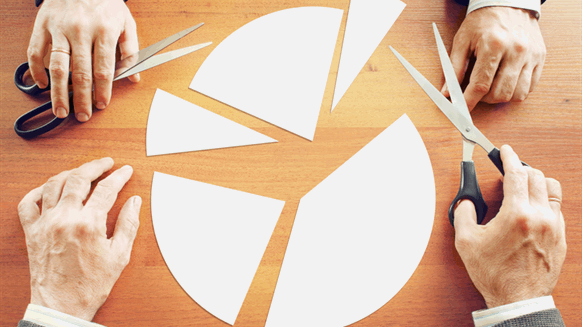 Royal Dutch Shell cut its dividend for the first time since the Second World War.

(Bloomberg) -- Royal Dutch Shell Plc cut its dividend for the first time since the Second World War as the oil slump triggered by the coronavirus pandemic reshapes the energy industry.

The surprise move is the latest illustration of how the global spread of the deadly disease is causing the biggest upheaval for generations. Energy consumption is undergoing a historic plunge, as is GDP growth in many countries. The global economy that emerges from the other side of the crisis may look very different, with lasting changes to patterns of fuel demand.

This is a big moment in the history of Shell and the oil industry. The company was by far the biggest payer in the FTSE-100, providing a reliable income to millions of pension fund investors. The two-thirds reduction in its dividend to 16 cents a share will shock investors, but also underscores the gloomy outlook for the year.

“It is of course a difficult day, but on the other hand it’s also an inevitable moment,” Shell Chief Executive Officer Ben van Beurden said in an interview with Bloomberg TV. “We have reset our dividend to a level we believe is affordable” and gives the company room to maneuver and continue to invest in the energy transition, he said.

Weak earnings in the first three months of the year are expected to be followed by an even tougher second quarter as lockdowns all over the world cause a historic slump in demand. Shell warned that it may need to curtail production of unwanted oil or natural gas.

Shell faces a “crisis of uncertainty” about energy consumption, prices and maybe even about the viability of some of its assets, van Beurden said. The dividend cut was based on “quite a bleak scenario” and “we don’t know what will be on the other side of this pandemic.”

BP Plc and Eni SpA already reported big drops in profit and growing financial stress. Exxon Mobil Corp. has frozen its dividend for the first time in 13 years, but until Thursday only Norway’s Equinor ASA had gone as far as cutting its payout.

“This is the new normal. Shell looks to be preparing for a prolonged downturn and wants to maintain its financial health,” said RBC analyst Biraj Borkhataria. In the long term, it could be seen as a positive move allowing Shell “to pivot more easily through the energy transition, and not be tied to a $15 billion dividend to service each year.”

The Anglo-Dutch company’s shareholder returns were already looking unaffordable before the virus hit. The company said in January that it had slowed the pace of its share buyback program and was unlikely to hit its $25 billion target this year. In March, it announced the cancellation of the next tranche of purchases as the severity of the pandemic became clear.

“Shareholder returns are a fundamental part of Shell’s financial framework,” Chairman Chad Holliday said in a statement. “However, given the risk of a prolonged period of economic uncertainty, weaker commodity prices, higher volatility and uncertain demand outlook, the board believes that maintaining the current level of shareholder distributions is not prudent.”

Shell has reset the level of its dividend and will continue to evaluate its “capital allocation priorities,” Holliday said. Increasing shareholder returns “remains our ambition,” he said.

Shell’s adjusted net income was $2.86 billion in the first quarter, down 46% from a year earlier but exceeding the average analyst estimate of $2.29 billion. Estimates have been revised significantly down since March, when the pandemic began to accelerate.

--With assistance from Rakteem Katakey and Christopher Sell.

Laura Hurst in London at lhurst3@bloomberg.net