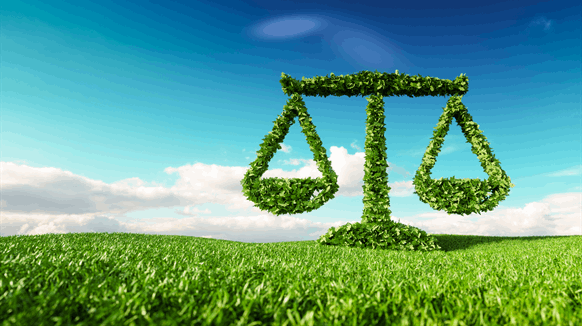 Analyst says the case probably will not affect USA courts, though.

(Bloomberg) -- Climate lawyers are gearing up to take on more fossil-fuel companies after a Dutch court ordered Royal Dutch Shell Plc to cut its emissions on the grounds that the oil giant is violating human rights by contributing to global warming.

“We are already supporting other organizations to set up similar cases in their countries,” said Donald Pols, director of environmental group MilieuDefensie, or Friends of the Earth Netherlands, which brought the case against Shell. “This court case and verdict open a whole new approach to climate litigation and because of its success it will be copied by other civil society organizations in the rest of the world.”

The Dutch court ruled on Wednesday that Shell should slash its greenhouse gas emissions 45% by 2030 compared to 2019 levels. The company has only pledged to reduce emissions by 20% within the decade and reach net zero by mid-century. Shell plans to appeal the ruling.

The outcome was a turning point for climate court cases, which boomed after 189 countries signed the landmark Paris Agreement in 2015. More than half of the 1,727 cases recorded in the past 35 years started after the nations agreed to slow global warming, according to a report by the Geneva Association. Initially, many cases challenged governments’ climate plans, but litigators are increasingly targeting companies.

Companies operating in developed economies, mainly the U.S., U.K., European Union and Australia, face the highest risk of legal action, according to a Climate Litigation Index by research firm and consultancy Verisk Maplecroft. But climate lawsuits are breaking new ground in emerging markets, with cases filed in Argentina, South Africa and India.

While the vast majority of cases have ended in favor of polluters, lawyers and activists are learning through trial and error. In a way, what's happening in the courts echoes how investors are making bets on climate technologies—many attempts will fail, but some that succeed could make a big dent in emissions.

Courts are also becoming more responsive to public concern over the climate change. “Companies have an independent responsibility, aside from what states do,” Dutch Judge Larisa Alwin said as she delivered her decision. “Even if states do nothing or only a little, companies have the responsibility to respect human rights.”

Oil majors have taken steps to address criticism from investors and consumers about their environmental impact, but they’re under pressure to do much more as the global climate movement gains momentum and the cost of clean energy drops faster than expected.

Decarbonization plans put forward by Eni SpA, Total SE and BP Plc were ranked the best in a report published on Thursday by financial thinktank Carbon Tracker. Shell, Equinor ASA, Repsol SA and Occidental Petroleum Corp are in the middle of the pack, while ConocoPhillips Co, Chevron Corp and Exxon Mobil Corp were rated the worst.

The top-ranked companies set goals to reduce emissions on absolute terms, while Shell, Equinor, Repsol and Occidental have only pledged to cut the intensity of their emissions. In other words, even if the amount of emissions per unit of energy falls over time, overall emissions may keep rising if their production increases.

“The Dutch court is forcing Shell to crucially switch from an intensity reduction target to a reduction of their emissions in absolute terms,” said Michael Coffin, a senior analyst at Carbon Tracker. “This ruling could have knock-on consequences on companies that adopted similar approaches, like Equinor, but if you’re BP or Eni, this ruling almost reinforces the approach they’ve adopted on absolute cuts.”

It also aligns what a growing number of shareholders think. A resolution by climate activist investor group Follow This requiring Shell to set absolute emission targets was supported by a third of investors this year, up from the 14% that a similar resolution got in 2020.

It’s unclear how the Dutch court decision will immediately affect Shell. The ruling applies to the entire Shell group, which is headquartered in the Hague but incorporated in the U.K. While the case will likely wind through the Dutch court system for years, this first ruling will ratchet up public scrutiny of the company, according to Brandon Barnes, a senior analyst on energy litigation at Bloomberg Intelligence.

The case probably won’t have an impact on U.S. courts, he said, which have jurisdiction over some of the world’s biggest oil companies. “This approach is not something that works with the framework we have in the U.S. because we don’t have statutes,” he said. “If you want change or liability at a company level, you need to ask congress to pass a law, and that’s been the stumbling block in the U.S.”

Still, pressure will continue to increase on U.S. oil companies which have so far lagged their European competitors on green plans, Carbon Tracker’s Coffin said. In another sign that the energy transition has reached a point of no return, stock investors on Wednesday ousted two Exxon directors seen as insufficiently attuned to climate change.

That climate litigation and shareholder activism have suddenly become real risks for the world’s largest producers of fossil fuels “is good for climate, but good for investors too,” Coffin said. “It should reduce the amount of potentially stranded assets that a company owns, leaving investors less exposed to a sector that will decline as the energy transition advances.”

--With assistance from Akshat Rathi, Hugo Miller and Diederik Baazil.

To contact the author of this story:
Laura Millan Lombrana in Madrid at lmillan4@bloomberg.net