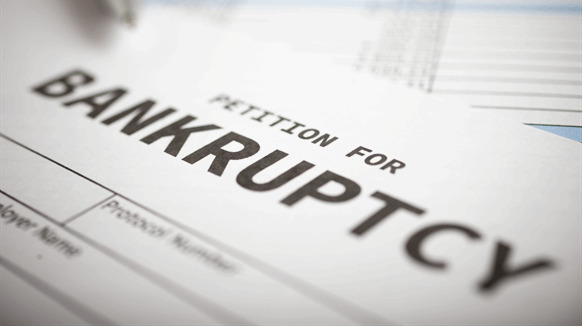 (Bloomberg) -- The unprecedented collapse in global oil markets brought another driller to its knees, forcing a champion of what was once the premier U.S. shale field to seek protection from creditors.

Whiting Petroleum Corp., facing more than a quarter-billion dollar debt maturity, filed for bankruptcy Wednesday, perhaps the most illustrious of the shale explorers thus far humbled by an unforgiving rout in every corner of the oil business.

American crude has surrendered two-thirds of its value this year and just closed out its worst-ever quarterly performance. As many as 70% of the nation’s 6,000 oil explorers eventually may go under, according to Mizuho Securites USA LLC analyst Paul Sankey, as the twin blows of Covid-19 and a Russia-Saudi price war destroy producers like Whiting.

Once the largest oil producer in North Dakota’s Bakken shale region, Whiting lost money in four of the last five years and spiraled deeper into debt just as the Covid-19 outbreak crushed energy demand. The company’s Bakken primacy won it little praise because the region was already falling out of favor as drillers shifted to lower-cost prospects in the Permian Basin.

Touted as one of the “comeback kids” of U.S. shale by Canaccord Genuity in late 2015, Whiting said Wednesday that it’s agreed to hand most of its ownership to noteholders in exchange for erasing more than $2.2 billion in debt, according to a statement.

As many as 40% of U.S. oil and gas companies could crater into bankruptcy or distress over the next two years as they grapple with a market crash and the coronavirus outbreak, according to asset manager Pickering Energy Partners LP.

Shale drillers aren’t the sole sub sector clobbered by the crash. Hornbeck Offshore Services Inc., which specializes in hauling gear to offshore drilling sites and production platforms, disclosed Wednesday that it’s negotiating a plan with creditors to ease a $1.2 billion debt burden. The company is planning a Chapter 11 filing.

On Wednesday, Denver-based Whiting faced the maturity of $262 million in convertible-notes . Whiting filed for Chapter 11 protection from creditors in the Southern District of Texas, listing debt of $3.6 billion and assets worth $7.6 billion in its bankruptcy petition.

Even before the viral pandemic sent crude prices tumbling to the lowest in almost two decades, Whiting was struggling and never fully recovered from the last market crash of 2014-2016. In December 2015, as crude prices were just weeks from dipping to a 13-year low, Canaccord analyst Stephen Berman listed Whiting among a group of potential “comeback kids” in the U.S. shale industry.

When former Anadarko Petroleum Corp. executive Brad Holly took the reins as Whiting’s chief in late 2017, oil prices were rising and at one point breached $75 a barrel. But the debt load remained stubbornly high, prompting Holly last year to fire one-third of his workforce and scale back production targets after posting an unexpected quarterly loss.

Oil now trades around $20 a barrel, well below the $50 level that Cowen Inc. analyst David Deckelbaum estimates Whiting requires to stay afloat. The company, which had a market capitalization of $11 billion in 2014, was valued at about $62 million as of Tuesday. Whiting’s bankruptcy filing followed that of shale drillers Alta Mesa Resources Inc. and Sanchez Energy Corp., which sought protection last year.

Moelis & Co. is Whiting’s financial adviser, while Kirkland & Ellis LLP is its legal adviser and Alvarez & Marsal is its restructuring adviser.

The case is Whiting Petroleum Corporation, 20-32021, U.S. Bankruptcy Court for the Southern District of Texas (Houston).

To contact the reporters on this story:
Joe Carroll in Houston at jcarroll8@bloomberg.net;
Jeremy Hill in New York at jhill273@bloomberg.net

MJL  |  April 02, 2020
Whiting has been headed this way for a long time. Way before this market mess. It's debt load was not sustainable. https://hottakeoftheday.com/ummm-excuse/
RELATED COMPANIES
Company: Whiting Petroleum Corporation more info