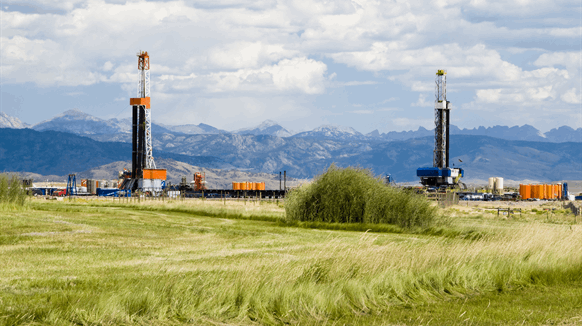 Some shale producers said all they need is $30 oil to consider bringing back curtailed crude output.

(Bloomberg) -- A pair of prominent shale producers said all they need is oil around $30 a barrel to consider bringing back curtailed crude output and fracking new wells.

Diamondback Energy Inc. is curbing production this month by 10% to 15% and sending home most of its fracking crews for the whole quarter. The Midland, Texas-based company expects to end this year with more than 150 wells that were drilled but never fracked as U.S. producers avoid pumping oil into a vastly oversupplied market. Parsley Energy Inc., meanwhile, has curtailed a quarter of its output and temporarily abandoned its five-rig, two-frack crew program.

The historic rout in crude prices amid the Covid-19 pandemic has spurred an unprecedented retreat from shale exploration. Producers from Chevron Corp. and Exxon Mobil Corp. to mom-and-pop drillers are curbing output as the world runs out of places to store additional oil supply.

Benchmark U.S. crude futures rose 20% to $24.34 a barrel at 1:20 p.m. on the New York Mercantile Exchange, little more than two weeks before a precipitous collapse into negative territory. Still, they remain more than 60% below the 2020 peak of $65.65 touched in early January.

When asked what oil price Diamondback needs before it turns the spigot back on, Chief Executive Officer Travis Stice said the company’s first priority would be restarting production that was choked back. Then, Diamondback would consider bringing back frack crews to tap supplies from wells that were drilled but never completed.

“There’s a lot of factors that weigh into that, but you’ve got to have prices in the high-20s or low-30s before we kind of signal going back to work in an aggressive or even in a non-aggressive way,” Stice said on a call Tuesday. “As we evolve as an industry into this new world order, I think it’s going to look a lot different than what we’ve historically been accustomed to.”

Parsley said it would need one to two weeks to turn its wells back on to their previous level of output. The company cited roughly $30 a barrel as the base case for running four to five drilling rigs and one to two frack crews, according to its earnings presentation. The Austin, Texas-based driller is waiting for the volatility of oil supply and demand to die down, executives told analysts and investors Tuesday on a conference call.

“This is a choice,” CEO Matt Gallagher said. “Currently the world does not need more of our product.”

At most, Parsley said it would maintain the roughly 25% curtailment level for June, if it has to.

Shale wells peak early and decline so quickly that new ones are constantly needed to maintain output. Stice declined to say what price the company would need to actually grow output on a quarter-by-quarter basis.

“If you look at some of the prices that we got in 2019, that certainly is a signal that you can get more aggressive on the growth,” he said. “But I think we’ve got to be pretty careful on being too prescriptive on what exact price signals are going to look like before you get back to growing again.”

To contact the editors responsible for this story:
Simon Casey at scasey4@bloomberg.net
Christine Buurma, Steven Frank