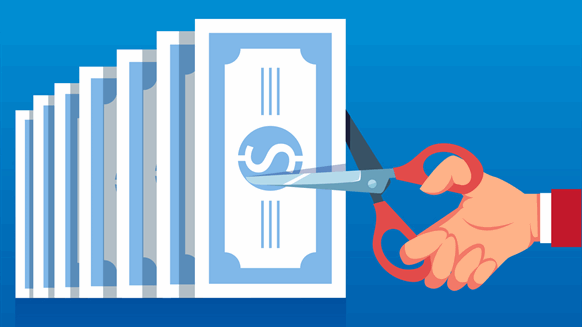 Shale explorers will likely cut spending budgets next year for the first time since the last price crash as crude spirals down again, analysts said.

(Bloomberg) -- Shale explorers will likely cut spending budgets next year for the first time since the last price crash as crude spirals down again, analysts said.

U.S. benchmark oil prices have dropped by more than a third from an Oct. 3 high, the largest percentage decline since early 2016. West Texas Intermediate is now hovering just above $50 a barrel, the minimum price most big shale companies plan their growth around, down from averaging almost $67 this year through September.

That means companies will sacrifice some production growth to keep a lid on expenditure, according to Wood Mackenzie Ltd. and RS Energy Group.

“Something has to give,” said Andy McConn, a Houston-based analyst at Wood Mackenzie. “We expected some minor increases in budgets going into next year but now we see risk to the downside, with budgets flat or down year on year.”

Before the recent price slump, 2019 was shaping up to be a promising time for shale explorers after years of disappointing investors by burning through cash as they sought growth. But signs of austerity are already beginning to emerge. Anadarko Petroleum Corp. said it plans to cut spending by about 3 percent next year.

An industry-wide cut in North America would be the first since 2016, when WTI plunged below $27 a barrel, according to data compiled by Bloomberg Intelligence. Most companies will announce 2019 capital plans with their fourth-quarter results in late January and early February. Chevron usually releases its capital plans early December.

The prospect for tougher times comes in stark contrast to third-quarter earnings reports that showed revenue was on the rise.

Companies such as Continental Resources Inc., Pioneer Natural Resources Co. and Devon Energy Corp. generated substantial free-cash flow in the quarter while still clocking production growth well into the double digits. EOG Resources Inc. made more than $1 billion in the period, putting it in the same league as veteran majors such as Italy’s Eni SpA and ConocoPhillips.

“At a $65 to $70 price deck we had a lot of free cash flow being forecasted but at these levels all that free cash flow is gone,” said Dane Gregoris, senior vice president at RS Energy Group.

Devon, Occidental and Anadarko were among companies that used excess cash to buy back shares this year, while others such as EOG hiked dividends.

“A lot of the big guys were doing buyback programs and shareholder friendly initiatives,” Gregoris said. “Maybe that’s the first thing that goes.”