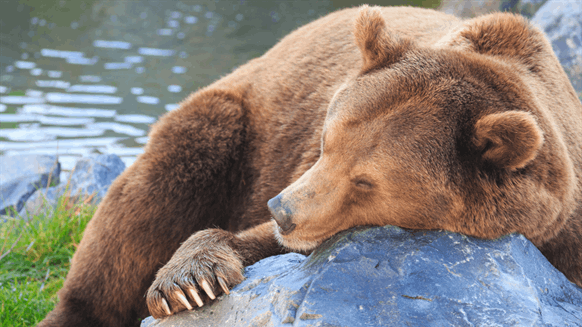 Oil-market bears are in deep hibernation.

(Bloomberg Gadfly) -- Oil-market bears are in deep hibernation. Given this particularly bracing New York spring, who can blame them?

Money managers like hedge funds have held a net long position of more than 1 billion notional barrels in the big three crude oil contracts in almost every week since late December.

The real story lies beneath that line, though. Speculative length has actually dropped by a notional 100 million barrels, or 8 percent, since it peaked in late January. But short positions, thin already, dropped by a fifth over the same period.

The upshot is that the ratio of long positions versus short positions held by hedge funds has spiked to about 13-to-1. Break it down, though, and the ratio for Brent has soared above 20-to-1:

The extended hibernation of oil bears is simultaneously supportive of prices and a potential sucker punch lurking out there.

There are several reasons for bulls to stay bullish: First,  as every day passes, we get closer to seasonally stronger demand. Meanwhile, with John Bolton starting work today as the new U.S. national security adviser -- after another weekend of mayhem in Syria -- the Iran nuclear deal looks ever more vulnerable. Elsewhere, Venezuela continues with its slow-motion supply shock. And Saudi Arabia and Russia are still leading efforts to keep barrels off the market -- with the latter perhaps more apt to stick with them -- if the ruble's panicked reaction on Monday to the latest set of U.S. sanctions proves a harbinger of instability.

On the other hand, geopolitics can prove a fickle friend and the other big drama playing out on the global stage -- the gathering Sino-U.S. trade spat -- looks friendlier to bears than bulls.

Also, the big restraining factor in the market, U.S. production, looks very strong. Friday's payrolls data were weak overall but showed the exploration-and-production industry's ranks creeping back above 400,000 in February for the first time in two years. West Texas Intermediate crude oil priced at Midland, Texas, now trades at a wide discount to the Nymex benchmark, suggesting Permian shale-basin output is straining pipeline capacity. That presents a risk to forecasts of higher production further out. But the immediate implication is that production is booming with oil prices in the $60s per barrel, which goes some way toÂ explaining why hedge fund positioning in WTI is noticeably less bullish than for Brent.

At this moment, though, rising Permian production isn't a surprise and fears of a trade war appear to be balanced by expectations of perhaps a different kind of conflict in the Middle East. So the bears have little compelling reason to weigh back in. Just keep in mind they've become so scarce -- and bulls so prevalent -- that their reappearance will be a jarring sight.

This column does not necessarily reflect the opinion of Bloomberg LP and its owners.

Liam Denning is a Bloomberg Gadfly columnist covering energy, mining and commodities. He previously was the editor of the Wall Street Journal's "Heard on the Street" column. Before that, he wrote for the Financial Times' Lex column. He has also worked as an investment banker and consultant.