Schlumberger's Year-End Frack Forecast is a Lump of Coal 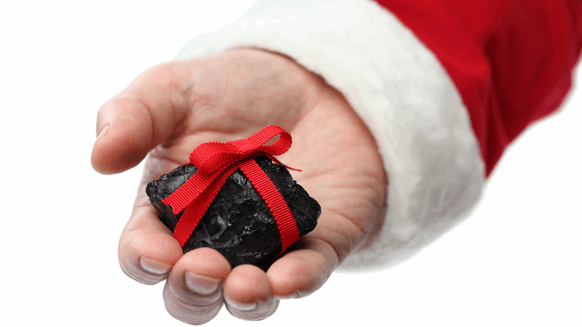 Schlumberger believes the North American fracking market - already expected to be a downer for the holidays - is turning out to be even worse than expected.

(Bloomberg) -- The North American fracking market -- already expected to be a downer for the holidays -- is turning out to be even worse than expected, according to the world’s biggest oil-service provider.

Schlumberger Ltd. expects sales in the U.S. and Canada to drop 15 percent in the final three months of the year compared with the third quarter, the company said Tuesday. A trio of factors including a plunge in crude prices, exhausted exploration budgets and maxed-out pipelines in America’s busiest field is prompting oil companies to let go of frack crews.

“We are seeing a significantly larger drop in activity than we expected, which is leading to a larger drop in pricing than we anticipated,” Patrick Schorn, executive vice president at the Houston- and Paris-based company, said in prepared remarks for an investor presentation. “We continue to see the weakening of the hydraulic fracturing market as temporary, with the expectation of a gradual recovery taking place over the first half of 2019.”

The number of fracking crews at work in the Permian Basin of West Texas and New Mexico is down 13 percent from a 2018 high in June, according to Primary Vision Inc. Fracking, which involves blasting water, sand and chemicals underground to release trapped hydrocarbons, is the most expensive part of drilling wells.

The 15 percent drop in overall North American sales implies at least a 25 cut to fracking revenue in the region, Brad Handler, an analyst at Jefferies, wrote Wednesday in a note to investors. Jefferies slashed its price target for Schlumberger shares 28 percent to $54.

The projected decline in North American sales is just the latest in a series of downward revisions by Schlumberger. In September, the company said a dearth of new pipeline capacity in the Permian was cooling off the red-hot region, leading to lower-than-expected third-quarter fracking results. Then a month later, the company said the fourth quarter would be even worse.

James West, an analyst at Evercore ISI, lowered his estimate for Schlumberger’s fourth-quarter earnings by 5 percent to 35 cents a share, according to a note to investors on Tuesday.

While the announcement was a “short-term negative,” the weakness in fracking demand “is already widely known,” Tommy Moll, an analyst at Stephens Inc., wrote in a note to clients.

“The price of oil is dominating the headlines in our industry, with a level of volatility that has brought increased uncertainty and decreased visibility,” Schorn said. “Presenting any reliable outlook for our business is like walking a tightrope.”