Saudis to Push Oil Export to 10MM Barrels a Day 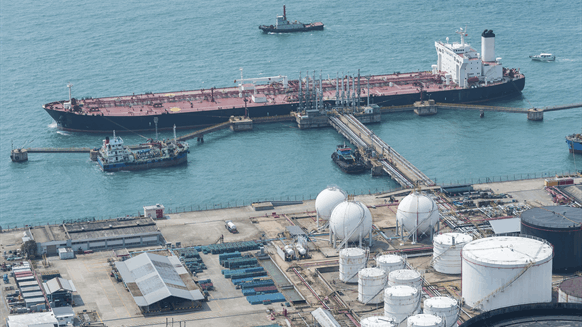 The increase in shipments shows the kingdom is determined to carry on with its policy of pumping flat out.

(Bloomberg) -- Saudi Arabia plans to boost oil exports even further from April to May, reaching a record of more than 10 million barrels a day as the kingdom taps a new field.

The increase in shipments of about 250,000 barrels a day shows the kingdom is determined to carry on with its policy of pumping flat out after its alliance with Russia collapsed. Moscow and Riyadh are engaged now in a price war that has sent Brent crude, the global benchmark, below $30 a barrel and prompted energy companies including Exxon Mobil Corp. to plan for big spending cuts.

“Saudi Arabia will utilize the gas produced from the Fadhili gas plant to compensate for around 250,000 barrels a day of domestic oil consumption, which will enable the Kingdom to increase its crude exports during the coming few months to exceed 10 million barrels a day,” the kingdom’s Energy Ministry said in a statement on Tuesday.

Before the price war broke out, Saudi oil exports averaged just under 7 million barrels a day from December to February, according to tanker-tracking data.

Riyadh, Moscow and several other members of the Organization of Petroleum Exporting Countries are boosting their exports just as global oil demand suffers an historic contraction due to the coronavirus pandemic. Goldman Sachs Group Inc. said on Tuesday that the rate of petroleum consumption was dropping right now by about 8 million barrels a day, or about 8% of global demand.

Trafigura Group Ltd., one of the world’s top independent oil traders, has estimated the daily demand loss at 10 million barrels as more countries lock down million of citizens in their homes, school close, flights are canceled and businesses close across Europe.

In a sign that the kingdom is preparing for a long battle, despite the heavy economic cost, state-owned oil giant Saudi Aramco on Monday indicated that Riyadh could withstand cheap oil.

“We are very comfortable with $30,” Khalid Al-Dabbagh, the finance director of Aramco, told investors on March 16 during the company’s maiden annual earnings call. “In a nutshell, Saudi Aramco can sustain very low oil prices and can sustain it for a long time and that is, especially the case compared to others in the sector.”

With the price war showing no sign of abating and demand falling, Wall Street is slashing its oil forecasts. Goldman is now predicting that Brent will average $20 a barrel during the second quarter. Oil traders privately say the benchmark could even drop into the single digits to force some producers to shut down their wells. That’s something that hasn’t happened since the industry downturn of 1997 to 1999.

To contact the editors responsible for this story:
Will Kennedy at wkennedy3@bloomberg.net
James Herron