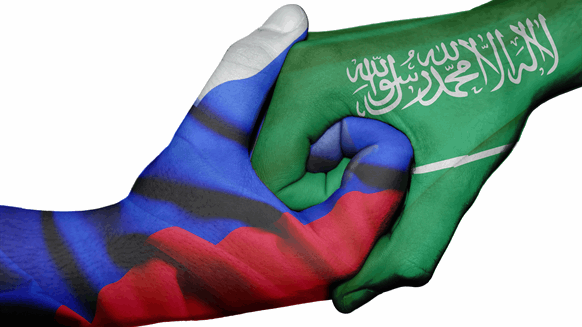 Saudi Arabia and Russia have agreed on the outline of a deal to cut oil production in an effort to lift the market.

(Bloomberg) -- Saudi Arabia and Russia have agreed on the outline of a deal to cut oil production in an effort to lift the market from a pandemic-driven collapse.

The two nations appear to have buried differences that led to a huge supply surplus, delegates said. The rapprochement came just before the extraordinary virtual meeting of OPEC and its allies kicked off.

It’s however still unclear how some of the obstacles will be cleared. Saudi Arabia was pushing for any supply curbs to be measured against a higher baseline -- its April production of above 12 million barrels a day, delegates said earlier. At the same time, Russia showed no sign of weakening its insistence that a deal was only possible if the U.S. cuts output too.

Moscow, whose grudge against U.S. shale could still arguably prevent a final deal, said Wednesday it’s willing to reduce output by 1.6 million barrels a day, or roughly 15%. Saudi Arabia was also discussing a cut of 15% to 17% on Thursday, delegates said, asking not to be identified because the talks were private.

However, the two sides were still disagreeing over the baseline for those reductions, the delegates said. It’s a debate that could make a huge difference to the size of the production cut. As the Saudis have pushed for their contribution to be measured against current record output, Russia has favored using an average of the first quarter, when the kingdom pumped about 9.8 million barrels a day.

At stake is the fate of entire oil-dependent economies, thousands of companies and millions of oil industry jobs as the OPEC+ coalition and Group of 20 energy ministers gather in two key video conferences this week. Crude futures have plunged to the lowest levels in almost two decades as the lockdowns around the world slash oil demand by as much as 70% in some places and Russia and Saudi Arabia battle for their share of a shrinking market.

With Trump pressing hard for a deal, and the whole Group of 20 involved too, a lot is riding on this week’s negotiations. Following the OPEC+ meeting, Saudi Arabia will lead a virtual conference of G-20 energy ministers on Friday at 3 p.m. Riyadh time.

“I think they’ll straighten it out -- a lot of progress has been made over the past week,” Trump said at a White House briefing Wednesday. “We have a tremendously powerful energy industry in this country now, number one in the world, and I don’t want those jobs being lost.”

The pressure on Saudi Arabia to prop up oil prices has been immense, with U.S. government officials and lawmakers all abandoning their traditional stance that cheap gasoline is good for America. Republican lawmakers in particular have sent pointed letters to Riyadh, demanding quick action. On Wednesday evening, a group of 48 Congressmen wrote to Crown Prince Mohammed Bin Salman saying the kingdom was “artificially” depressing global oil prices, hurting American interests.

Saudi Arabia is one of the few countries in the world that can boast crude production that’s profitable in the current environment. But the kingdom’s economy is at risk, too, as Riyadh needs much higher prices to fund its budget. So does Russia.

John Hoopingarner  |  April 09, 2020
In late 2014 US independents bragged that the US no longer was dependent on OPEC, particularly Saudi Arabia for oil imports. Saudi Arabia retaliated by flooding the market. The price dropped from $75 to $25 per bbl overnight. History is repeating itself.