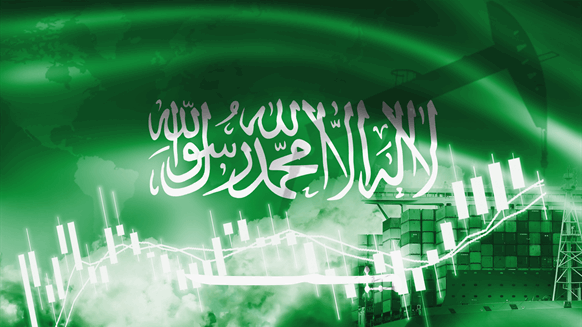 The first wave of crude oil is already on its way toward Europe and the US.

(Bloomberg) -- Saudi Arabia has made good on its pledge to ramp up oil exports in April, with a first wave of crude already on its way toward Europe and the U.S., a clear sign the price war remains in full swing.

The kingdom has loaded several of the supertankers it hired earlier this month to boost its ability to increase exports, according to ship-tracking data. In addition, Riyadh has used the last few weeks to shuttle large amounts of crude into storage in Egypt, a stepping stone to the European market.

The movements suggest that Riyadh is ramping up its oil production toward its target of supplying a record 12.3 million barrels a day in April, up from about 9.7 million in February, despite American pressure to end the price war.

Saudi Arabia earlier this month slashed its official selling prices and announced the output hike after Russia refused to join other nations inside the OPEC+ alliance to cut output. The announcement, interpreted in the market as an oil price war, sent Brent and West Texas Intermediate crudes tumbling. Since then, the collapse in oil demand due to lockdowns to stop the spread of the coronavirus has depressed prices even more.

In a sign that Riyadh is opening the valves, oil shipments have already surged in late March. For the first three weeks of March, Saudi Arabia was exporting at a rate of around 7 million barrels a day, but that jumped to more than 9 million barrels a day in the fourth week of the month.

With oil prices at the lowest in nearly two decades, U.S. Secretary of State Michael Pompeo last week directly asked the kingdom to “rise to the occasion and reassure” the energy market, diplomatic language for ending the oil price war.

American President Donald Trump and his Russian counterpart, Vladimir Putin, agreed in a phone call Monday that “current oil prices aren’t in the interests of our countries,” according to a Kremlin spokesman, though he declined to say what might be done to change the situation.

Trump earlier indicated that he was concerned about the impact of low oil prices on the American petroleum industry. In an interview on “Fox & Friends,” he said Russia and Saudi Arabia “both went crazy” and started an oil price war.

Despite the diplomatic pressure, Saudi Arabia is preparing to export more in the next few days. At least 16 very large crude carriers, collectively able to carry about 32 million barrels, are stationed near the Saudi oil terminals of Ras Tanura and Yanbu, according to shipping data tracked by Bloomberg.

“Regardless of the recent headlines about the U.S. pressuring Saudi Arabia, we do not see any change in Saudi or Russian policy for now,” said Amrita Sen, chief oil analyst at Energy Aspects Ltd., a London-based consultant.

Riyadh has already loaded three supertankers that are likely to head to the U.S., and it’s loading a fourth right now, according to oil market intelligence firm Vortexa Inc. The tankers, all hired by the Saudi national tanker company in the past few weeks to boost its shipping capacity, include the Dalian, the Agios Sostis I, the Maran Canopus, and the Hong Kong Spirit.

Already through March, Saudi Arabia has exported about 1.3 million barrels a day into Egypt -- the highest level in at least three years -- to pre-position crude for re-export into Europe, according to shipping tracking data compiled by Bloomberg and people familiar with the operation.

The surge in shipments to Egypt was so large that the African nation may become the largest destination for Saudi crude in March, displacing China and Japan, which traditionally top the ranking every month.

The cargoes have gone to a terminal at the south end of the Suez Canal before getting pumped via pipeline across the country to a storage and export facility called Sidi Kerir on the Mediterranean Sea. From there, the crude will then get re-exported as part of Saudi Arabia’s plan to supply as much as it can, at deep discounts, into a market that doesn’t need the supply. The world’s largest oil tankers, known as VLCCs, cannot sail the Suez Canal fully loaded due to draft limitations.

The next sign of whether the oil price war continues will come around April 5, when state-owned Saudi Aramco is expected to release its monthly official selling prices for May. Oil refiners and traders believe that Riyadh will have to deepen its discounts to sell all the oil the kingdom wants. If Aramco does indeed deepen the discounts, it will trigger a fresh round of tit-for-tat actions with other oil producing nations, piling further pressure on prices.

To contact the editors responsible for this story:
Will Kennedy at wkennedy3@bloomberg.net
Brian Wingfield, Amanda Jordan

Albert Dujardin  |  April 01, 2020
If the US wants to resolve the overproduction, in order to avoid that shale producers go bankrupt, they have to reduce the output considerably, 2 till 3 million bbls/d and then start negotiating with Saudi and Russia, not the other way around. The US is the cause of the problem by allowing wildgrow in the shale production! Half of them will go bust soon. To avoid worst, US should take the responsibility and propose an enormous reverence to Russia/Saudi. Both will accept to reduce, its in nobodies interest to sell oil for 25$$/bbls! Understand that the Saudis export increase is against the USA! Their is no King Saud anymore in Saudi Arabia
Dennis Crossland  |  April 01, 2020
The US should stop all imports of OPEC oil and offset the shortage with oil from the strategic reserve. We are in a state of emergency with the COVID 19 pandemic and what Saudi and Russia are doing is bull. Just my 2 cents worth.
Ray Holden  |  March 31, 2020
I’d tell em to sell their oil elsewhere
Jb Laughlin  |  March 31, 2020
On the oil tanker that is headed to the USA why would we as a country want them to unload their product here? From what I have read is that the USA is getting close to capacity within the next 6 months.