Saudi Oil Exports to US Plunge 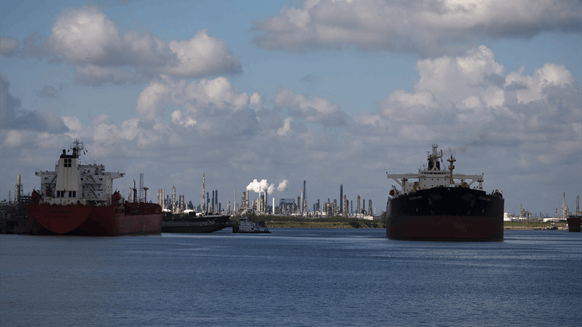 The US didn't import any Saudi crude last week for the first time in 35 years.

(Bloomberg) -- The U.S. didn’t import any Saudi crude last week for the first time in 35 years, a reversal from just months ago when the Kingdom threatened to upend the American energy industry by unleashing a tsunami of exports into a market decimated by the pandemic.

The absence of deliveries follows a slump in crude shipments to the U.S. that left the desert kingdom in October. Since tankers from Saudi Arabia take about six weeks to reach import terminals on either the west or Gulf coasts, the drop is only starting to show up now. This is the first week America had no deliveries based on available weekly data through June 2010 from the U.S. Energy Information Administration. A longer history of monthly figures shows this is the first time there were no Saudi imports since September 1985.

Earlier this year, the oil producing countries of the Organization of Petroleum Exporting Countries and ten non-OPEC allies agreed to cut production by a record 9.7 million barrels a day after a brief production free-for-all that saw prices plunge. The supply cuts have helped shore up crude, even as fuel consumption struggles to return to pre-pandemic levels. In the past month, oil prices have risen on hopes that demand could improve as a number of vaccines have been announced to combat the health crisis.

But America is still in the throes of the pandemic, with record infections in many states forcing new restrictions, while other parts of the world are recovering. U.S. gasoline consumption plunged to the lowest in years during the usual high-demand Thanksgiving holiday period.

The demand loss is so acute some U.S. refineries have been idled. “Throughput is still below where it was before the crisis because of reduced domestic demand. So why send more here when Asia is where recovery has been clear,” said Sandy Fielden, director of oil and products research at Morningstar Inc.

For Saudi Arabia, cutting shipments to the U.S. is the quickest way to telegraph to the wider market that it’s tightening supply. The government is alone in publishing weekly data on crude stockpiles and imports, which carry enormous influence among oil traders. Other big petroleum consuming nations, like China, publish less timely information about oil supplies.

In May and June, Saudi deliveries to the U.S. more than doubled from a year ago. The onslaught prompted Senator Ted Cruz, a Texas Republican, to tweet in April: “My message to the Saudis: TURN THE TANKERS THE HELL AROUND.” American refiners received the final installment of that bumper load in early July.

Since then, Saudi oil shipments to the U.S. have steadily declined. Just two weeks ago, they delivered only 73,000 barrels a day to customers, preliminary U.S. Energy Information Administration data show.

Still, Saudi Arabia won’t be giving up on supplying the U.S. anytime soon even during this pandemic. Tanker tracking data monitored by Bloomberg show shipments from the kingdom rising in November. Even so, after the first of those ships arrives off the west coast this week, there is a long gap until the next one is due on Dec. 23.

“The Saudis will be mindful about not losing any more U.S. market share to other sellers not if they can help it,” said Morningstar’s Fielden. That’s why despite the low seasonal U.S. demand, the Saudis cut prices for January shipments to its American buyers, he added.

In the short term, the election of Joe Biden could benefit Saudi Arabia. While transitioning away from hydrocarbons would have a long-term impact on oil demand, hopes to revive the 2015-Iranian nuclear deal would pave the way for more Iranian oil to flow globally. “Those sales will displace Saudi oil and that would mean Arabia would have to turn to the U.S. to maintain sales,” said Andy Lipow, president of Lipow Oil Associates LLC in Houston.