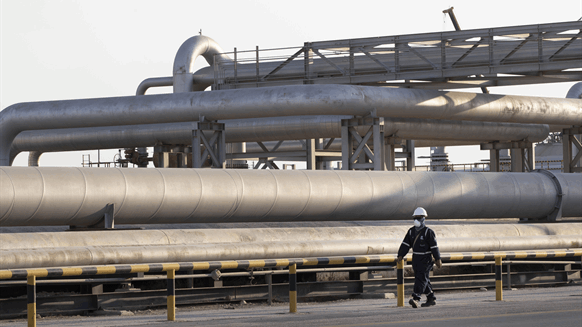 Saudi Aramco reported its second-highest earnings thanks to a surge in oil and gas prices.

Saudi Aramco reported its second-highest earnings thanks to a surge in oil and gas prices, though its refining and chemicals business was hit by falling margins and the global economic slowdown.

The company kept its dividend -- the world’s largest -- unchanged at $18.8 billion for the third quarter, despite generating record free cash flow of $45 billion. Its gearing ratio, a measure of net debt to equity, turned negative for the first time since early 2020, underscoring the sharp improvement in business conditions for Aramco since the start of the coronavirus pandemic.

Aramco’s net income was $42.4 billion in the third quarter. That was down from a record profit of $48 billion between April and June, but up around 40% year-on-year.

Oil prices have declined from 14-year highs in March as rising inflation and central bank monetary tightening slow the global economy. Yet Brent futures have still gained more than 20% this year and are trading around $94 a barrel.

“While global crude oil prices during this period were affected by continued economic uncertainty, our long-term view is that oil demand will continue to grow for the rest of the decade,” Chief Executive Officer Amin Nasser said in a statement.

The upstream arm of the world’s biggest oil company continued its strong performance, making income before taxes of $78 billion. The downstream unit, responsible for refining, chemicals, and fuel distribution, made a pre-tax loss of $1.1 billion, compared with a profit of almost $4 billion a year earlier.

“This result was largely driven by inventory re-valuation losses” as prices of refined products fell, Aramco said. Sabic, a chemicals firm 70%-owned by Aramco, announced a steep drop in profit on Sunday amid lower demand for products from paints to plastics.

Nasser, the CEO, said Aramco would be an exception to the “global underinvestment in our sector” and that it would continue to boost both oil and gas output.

The company has benefited from OPEC+ -- a 23-nation alliance led by Saudi Arabia and Russia -- increasing production this year. Aramco pumped 11 million barrels a day of crude in September, close to a record.

OPEC+ is cutting output from this month, saying it needs to counter weakening energy demand in major economies. Yet Aramco is still likely to average its highest-ever crude production this year.

The company is spending billions of dollars to raise its maximum capacity to 13 million barrels a day by 2027 from 12 million today. It’s also wants to boost natural gas output more than 50% by 2030.

It will continue to expand the downstream business despite its struggles in recent months.

This year, Aramco has bought a stake in a Polish refinery and said it would invest in a 300,000-barrel-per-day refining and petrochemicals complex in China. It bought Kentucky-based Valvoline Inc.’s lubricants and chemicals unit for $2.65 billion in August.