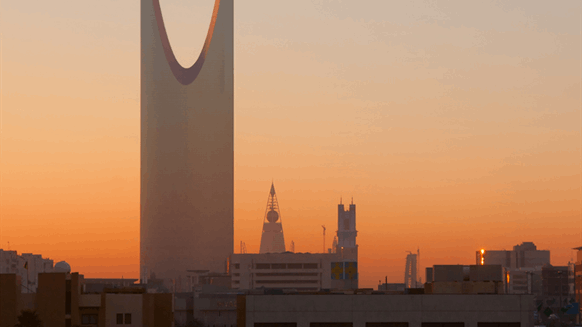 Few could have expected the stock to face so stern a test less than a month after the company's historic $25.6 billion initial offering.

(Bloomberg) -- Saudi Aramco’s status as an oil-producing behemoth located in one of the world’s most turbulent regions always marked it as likely to suffer bouts of volatility.

But few could have expected the stock to face so stern a test less than a month after the company’s historic $25.6 billion initial offering.

The world’s most profitable company extended declines Monday after dropping to its lowest closing price yet a day earlier, as the U.S. killing of Iran’s most prominent general last week triggered fresh concern of a wider conflict in the Gulf region. The move suggests that rising oil prices -- Brent crude has climbed above $70 a barrel for the first time since May on a closing basis -- aren’t necessarily a boon for the energy giant.

While Aramco has performed better than Saudi Arabia’s benchmark Tadawul index this week, the sudden rise in geopolitical tension comes just as the end of the stabilization period for the shares nears.

“The risks will remain over the near term as both the United States and Iran aim threats at one another,” said Jameel Ahmad, a markets analyst at FXTM in London. The drop in Aramco shares “is a natural reaction to the coordinated risk aversion that has swept global sentiment since the events at the end of last week.”

The missile attack that killed Iran’s General Qassem Soleimani in Iraq, ordered by U.S. President Donald Trump, was a reminder of the risks of investing in the region. In September, Saudi Arabia’s oil production was cut by half after a swarm of explosive drones struck some of its most important production facilities. The U.S. and Saudi Arabia blamed Iran for the attack, while Yemen’s Houthi rebels claimed responsibility.

Aramco was back pumping 9.9 million barrels a day just one month after the attacks and the company pressed ahead with what was to be the world’s biggest IPO.

At the time of the sale, many foreign investors cited geopolitical risk as reasons to stay away from the shares, and considered them too expensive. Even after this week’s fall, Aramco has a valuation of $1.8 trillion, easily the highest among listed companies.

Aramco still has some built-in protection because the shares are mostly in the hands of those used to regional politics, mitigating selling pressure at times of tension. Saudi government institutions invested almost $2.3 billion in the IPO. The government also relied heavily on ordinary Saudis and funds from neighboring Gulf Arab monarchies to ensure the success of the offering.

On top of that, Goldman Sachs Group Inc. is acting as share-stabilizing manager for the offering until the end of this week and can buy shares as part of that. It also has the right to exercise a so-called greenshoe option of 450 million shares, which would normally be used if the stock was rising too fast. No price-stabilization transactions had been executed as of Dec. 31, according to a statement from Aramco.

“Very few active managers are in the stock and most shareholders are either government-related entities, quasi-passive or passive,” said Marwan Haddad, senior portfolio manager at Emirates NBD Asset Management in Dubai. “Therefore volatility would be low unless an actual attack takes place, which we believe has a low probability. Moreover, as the oil price goes up, downside risk falls.”

To contact the editors responsible for this story:
Celeste Perri at cperri@bloomberg.net
Justin Carrigan, Paul Wallace