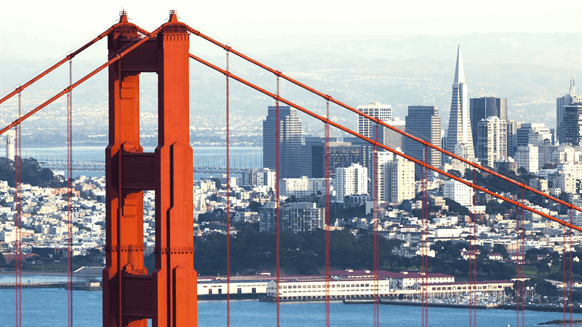 California towns and cities remain at the forefront of a push to phase out the use of gas in homes and buildings.

(Bloomberg) -- San Francisco will ban the use of natural gas in new buildings starting next year, becoming the latest city in California to clamp down on the heating and cooking fuel because of climate concerns.

The measure will require all-electric construction for buildings -- with exceptions for restaurants -- starting in June 2021, according to an ordinance passed late Tuesday by the San Francisco Board of Supervisors. It’s the strictest natural gas prohibition passed by a big city so far in California, according to the Sierra Club, an environmental advocacy group.

California towns and cities remain at the forefront of a push to phase out the use of gas in homes and buildings as a means to cut down on greenhouse gas emissions. At least 38 municipalities, including San Francisco, have passed measures that will restrict gas hookups, according to the Sierra Club. The natural gas industry largely has opposed these efforts, saying that they will lead to higher energy bills and will eliminate customers’ energy choices.

PG&E Corp., which supplies natural gas and electricity to the city, supported the measure, a spokesman said.

San Francisco earlier banned natural gas in new city-owned buildings. The fuel accounted for about 80% of building emissions in the city in 2017, according to the ordinance.

Natural gas is the second largest source of greenhouse gas emissions in San Francisco and poses major health and safety risks. All-electric construction in new buildings is a critical step toward a safer, healthier San Francisco and planet for future generations.

“Natural gas is the second largest source of greenhouse gas emissions in San Francisco and poses major health and safety risks,” Supervisor Rafael Mandelman, a sponsor of the measure, said in a post on Twitter.

Ron Divine  |  November 13, 2020
Typical liberal mindset! Do these buffoons even understand how electricity is generated? Doubtful! When the California liberals pull their heads out of their collective posterior, then they can join the adult table of discussion! Until that happens, they should be banned from making long term decisions that impact quality of life.
Robert Davis  |  November 12, 2020
freeze i dont care