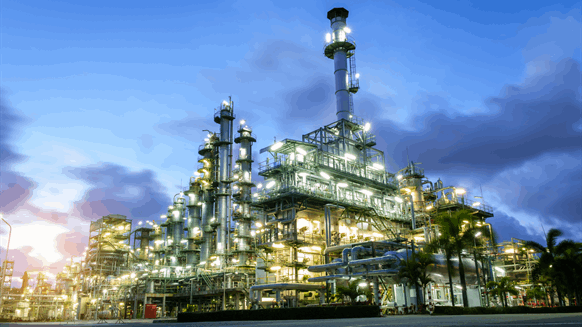 Reliance Industries Ltd. may sell as much as 25 percent of its refinery business in a deal that could yield at least $10 billion.

(Bloomberg) -- Indian billionaire Mukesh Ambani’s Reliance Industries Ltd. is considering selling as much as 25 percent of its refinery business in a deal that could fetch at least $10 billion, people with knowledge of the matter said.

Reliance is sounding out potential investors including state-owned Saudi Arabian Oil Co. and Abu Dhabi National Oil Co. to gauge their interest, according to the people, who asked not to be identified because the information is private. Aramco has also been considering investing in a new Indian refinery that Reliance is planning to build, the people said.

Discussions are at an early stage, and valuation could be a hurdle to any agreement on a stake sale, the people said. Aramco has been weighing various deals that would increase its exposure to Reliance’s refining operations, though it hasn’t made a decision on what form any eventual investment would take, the people said.

An Adnoc spokesman said “there is no basis in fact to this speculation.” Aramco declined to comment in an emailed statement.

“Our company evaluates various opportunities on an ongoing basis,” Reliance said in an emailed statement, declining to comment further. The Times of India reported earlier Wednesday that Aramco is in talks to buy a stake in Reliance’s refinery and petrochemicals business, citing unidentified people.

Middle Eastern oil giants like Aramco and Adnoc have been expanding into downstream operations as they seek to move from being pure producers to becoming more integrated energy companies. Reliance’s debt has risen over the past few years, as the Indian conglomerate poured money into new sectors such as telecommunications, and stood at $32 billion at the end of December, data compiled by Bloomberg show.

Reliance has been considering building a third plant at its giant Jamnagar complex in western India’s Gujarat state, Bloomberg News reported in November. The proposed facility would be able to process as much as 30 million tons of crude per year, which would boost its oil-refining capacity by about half, people with knowledge of the matter said at the time.

Ambani, Asia’s richest man, met with Saudi Energy Minister Khalid Al-Falih in December to discuss opportunities for joint investments in petrochemical, refining and communications projects, according to a tweet from the latter at the time.

Aramco has been targeting refining deals in India since at least last year, when Chief Executive Officer Amin Nasser told reporters that the firm wanted to double capacity to produce gasoline and other fuels.