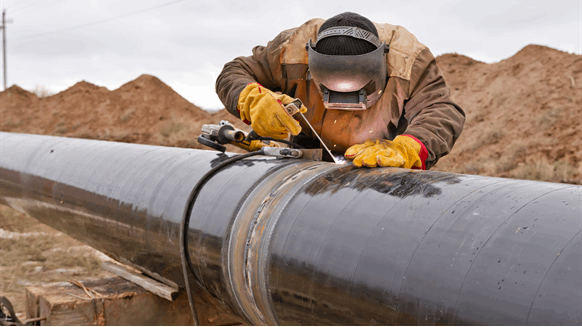 Egypt won't begin receiving gas from Israel under a $15-billion deal until the middle of the year.

(Bloomberg) -- Egypt will begin receiving gas from Israel under a $15 billion deal around the middle of the year, after unexpected issues with the pipeline connecting the countries delayed the start-up by several months, people familiar with the situation said.

Shares of the largest Israeli partner in the gas fields fell.

He didn’t give details, but two people familiar with the situation said due diligence by the companies involved had discovered that the pipeline would require more work than expected to bring it online. The Egyptian partner in the project had said he expected trial quantities to begin flowing in March if the pipeline was found to be in good condition.

The gas deal adds an economic dimension to a relationship dominated by security since the two countries signed a peace treaty that changed the face of the Middle East four decades ago. It also advances Egypt’s plan to capitalize on its own giant Zohr gas field and position itself as an energy re-export hub on the doorstep of gas-hungry Europe.

Egypt will initially import gas from Israel’s Tamar field and receive flows from nearby Leviathan once it comes online at the end of the year.

Although the overall condition of the pipeline is good, Israel’s Delek Drilling LP, U.S.-based Noble Energy Inc. and Egyptian East Gas Co. found some components were missing or faulty, while modifications and repairs would take longer than foreseen, the people added, declining to be named as the information was not public. Spare parts had to be imported, they said.

A spokeswoman for the companies developing the Israeli reservoirs declined to comment. Officials from East Gas did not immediately respond to requests for comment.

Delek Drilling LP, which holds a 45.3 percent stake in Leviathan, fell as much as 1 percent in Tel Aviv trading.

The companies are working to reverse the flow of the pipeline, which used to carry Egyptian gas to Israel. It’s been idle for years after Egypt halted exports in 2012 due to a domestic energy shortage and repeated attacks by Islamic militants on the overland connection that runs through restive northern Sinai.