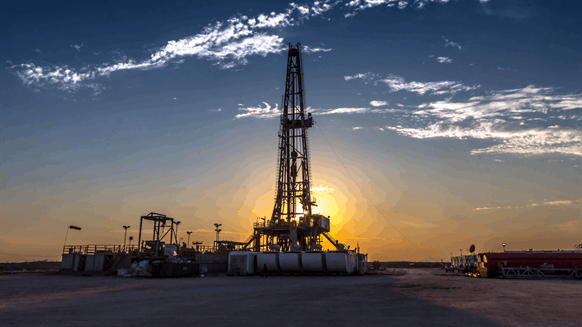 Oil producers drilling so-called parent-child wells in the Permian Basin are risking the loss of 15% to 20% of the crude that can ultimately be recovered from those wells by spacing them too close together.

(Bloomberg) -- Oil producers drilling so-called parent-child wells in the Permian Basin are risking the loss of 15% to 20% of the crude that can ultimately be recovered from those wells by spacing them too close together, according to a Houston-based investment bank.

The analysis from Houston-based investment bank Tudor, Pickering, Holt & Co. -- contained in a 61-page presentation seen by Bloomberg -- is the latest salvo in the debate on the spacing of so-called parent-child wells in the Permian, the most prolific oil patch in the U.S.

When drilled too close to the initial “parent” well, output from a “child” can be much less prolific. But producers risk leaving oil in the ground if the spacing is excessive.

In much of the Permian, a region that stretches across West Texas and New Mexico, the amount of oil that can be recovered from child wells is on average about 20% to 30% lower than that of the parent, the analysis shows. That means overall production from a particular area could be some 15% to 20% lower than projections made by producers.

“Child wells get progressively worse relative to their parent well with tighter spacing,” according to the analysis.

In a note to clients Friday, Sanford C. Bernstein analyst Bob Brackett said parent-child interference could end up decreasing overall production by a million barrels a day. “But it’s back end loaded,” he said.

It’s not all bad news. One solution to the parent-child problem is to drill and frack both wells at the same time, which has been shown to improve recoveries, according to Tudor, Pickering, Holt. Those “co-developed” wells are showing results that are largely in line with company projections, the analysis said.

Last year, 60% of wells in the Permian’s Delaware sub-basin were child or co-developed wells, according to the bank. Until 2017, the bulk of the Delaware was made up of parent wells. Tudor, Pickering, Holt declined to comment on the presentation.

Concho Resources Inc.’s experience highlights how the spacing issue can trip up even well-regarded industry names. Concho shares plunged 22% on Aug. 1 after the company revealed it had spaced a 23-well pad too tightly.

Two pioneers of the industry -- Mark Papa and Scott Sheffield, CEOs of Centennial Resource Development Inc. and Pioneer Natural Resources Co. respectively -- warned earlier this month that producers are running out of prime drilling areas and that the issue will lower U.S. production over time.

The phenomenon exacerbates challenges posed by the very nature of shale: With well output falling off by as much as 70% in the first year, drillers need to pedal faster and faster just to maintain output.

The number of Permian drill-rigs in operation have slumped, something Sheffield said is largely due to the “down spacing” issue. “It’s all because a lot of people are drilling parent-child-relationship wells,” he said in a Bloomberg Television interview this week.